In my current work to sharpen the profile of the Ancient Lands setting I am creating, I started looking deeper into the old Planetary Romance genre. In many ways it’s “Sword & Sorcery with laser guns”, but I would say it usually has a more grander scale and glamorous atmosphere to it, which I really love. The old Star Wars movies (and the most recent one) really are much more Planetary Romance than Space Opera, which is the genre of Foundation, Lensman, and Enders Game. Mass Effect, which very greatly inspired me, is both. The business with the Reapers, Cerberus, and the human Systems Alliance is classic Space Opera, while the story branches that deal with the Krogan and the Quarians feel very much like classic Planetary Romance to me. While looking for more in-depth information about the stylistic elements of Planetary Romance, I came across this interesting article adressing the feeling of ancient history that you find in the old Star Wars movies. (I am in agreement that the Expanded Universe mostly missed this aspect.) Basically, Star Wars feels ancient because even though the technology is much more advanced than ours, it is used in very antiquated ways. The Empire builds huge mechanical war elephant. Intelligent robots are treated and traded like slaves. And of course you have knights fighting with swords. There’s a princess and the big bads are adressed as Lord and as Master. Despite the technology, Star Wars really feels like its the ancient past, not the distant future.

And that got me thinking. Certainly you could use the same technique to make a relatively generic fantasy setting not feel like the late middle ages, but as being set thousands or even millions of years earlier in the history of their planet. Robert Howard set the Hyborian Age of his Conan stories in an age between the sinking of Atlantis and before the start of the Neolithic, but is often rather inconsistent in making it really feel that old. When people are trying to put Conan into pictures, they usually cheat a bit and don’t show the armor and weapons that are actually described and replace them with something more ancient Greek looking.

So I started thinking about elements that I would identify as visual clues that a story is set in an age long before the emergency of equivalents to medieval France or England. And I turned up with a surprisingly lot. 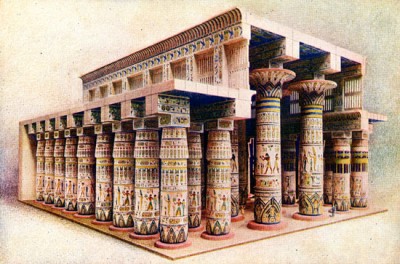