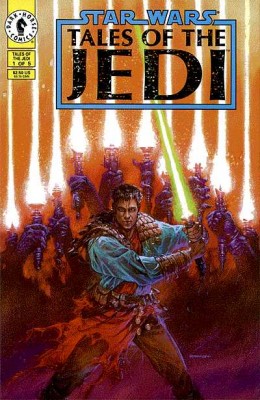 Star Wars: Tales of the Jedi is a comic series that was published by Dark Horse from 1993 to 1998 with a total of 35 issues. This was only two years after the Thrawn Series by Timothy Zahn had kickstarted the Expanded Universe as we know it now, placing it pretty early in the history of Star Wars tales. The series was created by Tom Veitch, who had written the Dark Empire comic series a year earlier (which I consider the greatest travisty of the Star Wars universe after the Holiday Special), but he was joined by Kevin Anderson in 1994, who had just released his Jedi Academy novel series (which also has a pretty poor reputation among fans) and became the sole writer for the series a year later.

The Tales of the Jedi are set 4,000 years before the movies, in a time when the Republic was still smaller, the galaxy less explored, and the Jedi much more numerous. The first three story arcs, written by Veitch, (and giving us the now popular title “Knights of the Old Republic”) follow the adventures of the young Jedi Ulic Qel-Droma and his brother Cay and their fellow knight Tott Doneeta, who are send to the planet Onderon to help the government of the capital city end a war with the tribes living in the surounding jungles. They discover the spirit of the Dark Jedi Freedon Nadd manipulating the events on the planet, facing the three Jedi with a much bigger threat than they anticipated. As the crisis escalates, Ulic’s path crosses with the newly trained Jedi Nomi Sunrider, who has an exceptional talent for the Battle Meditation technique, which allows a single Jedi to coordinate the efforts of an entire army and making her extremely valuable.

Once Kevin Anderson joined as second writer, he introduces Exar Kun, a character from his Jedi Academy novels, whose spirit is trying to turn Luke’s Jedi students on Yavin 4 to the Dark Side. Exar Kun is unhappy with his master not trusting him to learn about the dangerous powers of the Dark Side and so sets out to learn more about them on his own. A path that very much mirrors that of Anakin Skywalker in the movies that were made a few years later. Exar Kun gets corrupted by the still not fully destroyed spirit of Freedon Nadd who leads him to the ancient Sith tombs of Korriban, where he once more unearthes the ancient secrets of the Sith. At the same time Ulic Qel-Droma is trying to infiltrate the leadership of a new Sith cult called the Krath who also have been guided by Freedon Nadd and establishing their own galactic power by allying with the Mandalorians and become a major threat to the Republic. Halfway through the arc, after the Dark Lords of the Sith series, Veitch left as a writer, leaving the field entirely to Anderson with the Sith War series.

A third main arc is set a thousand years earlier and centers on the first clash between the Republic and the Sith Empire under the leadership of Naga Sadow, who uses trickery and conspiracy to first destroy his rivals for control over the empire in The Golden Age of the Sith and then sets his eyes on the Republic in The Fall of the Sith Empire. A final, much shoter arc called Redeption, is set some years after The Sith War, but is mostly a personal story of Nomi Sunrider’s daughter Vima and doesn’t really add much to the historic lore of the Old Republic.

The setting of these comics would later return on the Knights of the Old Republic videogames, which right after the release of the second game got another comic series also, and confusingly, called Knights of the Old Republic. I was interested in those comics and had read the Jedi Academy novels at some point in the late 90s, so I decided to start at the very begining with the Tales of the Jedi series to know more about those references to Exar Kun, Ulic Qel-Droma, and Naga Sadow. When I first read them some three or four years ago, I quite enjoyed them. But having read them again over the last two weeks, my opinion of the series is now very different.

The first arc, written by Veitch, is really pretty bad. The art is very sloppy and ugly, characters are as flat as it can get, and what little traces of a plot there are are almost entirely told by exposition in boxes with the characters not really contributing anything with their own words. The second arc, begun by Veitch and Anderson, is a noticable improvement in that the art now looks only bad and that the plot consists of exposition in speech bubbles instead of boxes. It’s still a bad comic, though. The third arc, now done completely by Anderson alone, first starts surprisingly well with Golden Age of the Sith. The art has now been upgraded to simply ugly, though servicable, and there’s actual plot and Naga Sadow has some real personality as we follow him taking out his rivals and becoming new Dark Lord of the Sith. Sadly that didn’t last and The Fall of the Sith Empire is right back to being a jumbled mess of exposition. The short Redemption at the very end is okay, I guess. I still don’t think it’s any good or very interesting.

So yeah. My final impression of the Tales of the Jedi series is that it’s bad! There are noticable improvements over time, but those are simply from “godawful” to “only bad”. The only reason why I would recommend to anyone to read any of these comics, would be a great interest in the lore of the early days of the Star Wars universe. But even then I would say that only The Golden Age of the Sith and The Fall of the Sith Empire are worth it. If you really want to know about Ulic Qel-Droma and Exar Kun, then you’re much better of at just reading the page on Wookiepedia. There is so little plot and characterization in Veitch’s comics that you really are not missing out anything. It probably is much more exciting to read a detailed summary than to shovel your way through that pile of dung yourself.