Night Winds is the third Kane book by Karl Wagner that I’ve read. I already liked Death Angel’s Shadow and Bloodstone very much and so I had pretty high confidence that this one wouldn’t disappoint me either. Like Death Angel’s Shadow, Night Winds is a collection of several unconnected stories of various length. And as many others have already claimed before me, Kane seems to be at his best during these shorter tales when Wagner can get straight to the point. The more stories I read, the more I am surprised that only Howard, Leiber, and Moorcock are widely regarded as the great giants of Sword & Sorcery, but I think Wagner can easily stand among them as an equal. The stories of Kane are a lot more gloomy and less exhilarating fun compared to Conan, but I think when judging them by their own strengths they really come out pretty even. 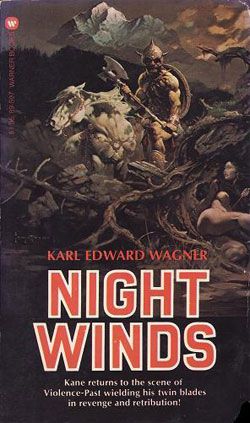 Just like Conan, Kane is always the centerpiece of his stories and the defining element of the series. The stories are not just with Kane, but always about Kane. And as a character he is extremely fascinating. Kane is possibly one of the most extreme cases of anti-hero with a heart so black and cruel that he would easily be a villain in any other stories but his own. And from what what other people tell about the things he is doing between the stories, being a full out villain is apparently his normal mode. Not only is he an evil man, Kane is also cursed to be immortal. He does not age and recovers from injury and sickness much faster than any normal human. But he can still be killed and he does feel pain like any living man and that’s the true punishment behind his curse. Because the one thing that Kane hates more than his eternal life is the very idea of seeking escape in death. He probably could kill himself or allow others to kill him with no problems, but his pride drives him to cling on to his tormented life with bare hands and teeth until his very last breath. With all the time in the world and a powerful body, he mastered the arts of fighting and sorcery ages ago and is quite probably the most dangerous person in the entire world. But in the world of Kane, sorcerers don’t cast spells and are much more like Lovecraftian ocultists, and even a warrior like himself can not fight a dozen men by himself. He spends his eternity by gathering armies of mercenaries and bandits to carve out small empires to rule, but eventually he is always either defeated by his enemies or simply gets bored with it and walks off into the wilderness with nothing but his sword and his clothes to sink into sorrow or find himself some new kind of diversion. It is during these times where almost all of the tales of Kane are taking place.

Undertow is the first story in the book and I think an excelent choice to start with. It was the first time I’ve read a Kane story last year and it’s a great introduction to the character. Somewhat unusually, Kane has only very few and short appearances in this story. Instead we mostly follow other people talking about Kane, who is currently the sorcerer king of the city. This works surprisingly well and does a great job at establishing Kane as a really mysterious and dangerous character, because they are all completely terrified of him. It worked for Sauron and it works for Kane.

In Two Suns Fading we have Kane just after he got fed up with his last empire and simply walking out into the desert, leaving all his advisors and generals to figure out what to do next by themselves. It probably will all fall into chaos and bloodshed, but Kane doesn’t care. In the desert, Kane encounters a lone giant who is on a quest to find the tomb of an ancient giant king, and with nothing better to do Kane decides to join him. It’s a relatively short story and not one of Wagner’s best, but still pretty entertaining.

In The Dark Muse, Kane has made himself an underworld boss in some desert city, where for some strange reasons he has become a good friend and generous patron to a famous poet. This seems rather uncharacteristic at first, but so what? It’s Kane! He’s lived almost forever and is a highly intelligent man who can be quite cultivated when he wants. Surely he has been doing much stranger things through the ages. The two come into possession of a strange sorcerous artifact that has the power to send a person into the realm of dreams, and also nightmares. Kane’s poet friend really wants to try it out in hope to finding inspiration for an incredible masterpiece, but when they begin things do turn very strangely and dangerous.

Raven’s Eyrie takes place in wintery forrested hills, where a badly wounded Kane and the few surviving members of his recently destroyed gang of bandits are running from a band of bounty hunters close behind them. And it is also the night of the Demonlord’s Moon, so they have little choice but to take refuge in a small and isolated inn that Kane had previously raided some eight years ago. The owner is one of the few survivors who didn’t get masacred by Kane’s men and senses an opportunity to get her revenge. This is one of these great stories where there aren’t really any heroes but instead you have just a group of terrible people doing horrible things to each other out of hate and greed. But Wagner manages to still make it a strory that is very enjoyable to read, as he generally doesn’t go overboard with the violence and gore. It’s a dark tale and a somewhat bleak tale, but it doesn’t revel in unnecessary suffering.

Lynortis Reprise is probably the creepiest Kane story I’ve read so far. The plot is very simple and there isn’t really much happening, but the real star of this story is the location where it takes place. Lynortis and the surrounding area are the remains of a battlefield where thirty years ago tens of thousands of soldiers had laid siege to a city for two years. It is overgrown with weeds and bushes and littered with broken siege engines and mountains of skeletons, and riddled with craters, trenches, and tunnels, and the ruined remains of what once were farms and mannors. It really reads like Wagner had just been working on a World War I horror story before writing this. Kane encounters a group of old mercenary companions who are looking for a treasure they believe to be hidden somewhere in the ruins of the city and Kane eagerly accepts the offer of joining them. There is probably more gold and jewels than they can carry and they also need to be quick as there are others hunting for the treasure as well. However, treasure hunters are not the only people in the area as there are still some survivors of the battle living in some of the ruins and there are also things in the tunnels below the ground that one character refers to as the half-men. That’s already an ominous name, but the meaning behind it is even more disturbing than one would probably expect. In many ways the story feels somewhat experimental and is presented different from the other stories in the book. Sometimes it works quite well, at other times not so much. But it’s still a very interesting read. The following is probably one of my favorite paragraphs I’ve read:

Spewing tentacles of incandescent death blossomed over the roadway. Where it stuck, men flamed into cinder. Searing fragments reached out like lethal fingers, burning all they touched. Men and horses shrieked in pain and terror, bolted over the outer wall in blind panic. Flaming bodies pitched over the edge, falling like stars into the darkness far below.

This story also surprised me by having a simple but really good twist that I totally did not see coming. And the way it is presented you have several opportunities to figure it out yourself instead of having a character step forward and saying it directly, which I think makes it hit a lot harder when the pieces suddenly come together in your head. Only when I caught it did I realized that I had already missed two previous hints that could have given it away. Putting this story close to the end of the book was another good choice in organization as you really have to be familiar with Kane to make it work. If this were the first or second Kane story you read, it would probabaly just be strange and look like poor plotting. But this way it was a great wow moment when I made the realization.

The last story is Sing a Last Song of Valdese, which again is relatively short compared to the others. It’s a nice little spook story about a group of seven travelers spending the night in a small inn in the middle of a wilderness haunted by bandits and ghosts. It’s really a pretty straightforward horror tale rather than an adventure story, but it fits the world of Kane. Nothing amazing and it probably could have been expanded into something much more refined, but I like the idea behind it.

Not surprisingly, I really like this book. It’s just as good as Death Angel’s Shadow and a step or two above Bloodstone. If you like Kane you should obviously read it. If you haven’t read any Kane stories but want to, this one is a very good pick to start with as well. I very much recommend it.