I am as big a Star Wars fan as you can get before it gets insane and embarassing. But I am also highly critical of it and more than just willing to recognize its many flaws. And, oh dear, there’s so much of them. But one of the biggest ones is one I’ve almost never see discussed anywhere.

And this has nothing to do with Lando Calrissian or even Jar Jar Binks. People have complained about the Neimodians talking in a Japanese accent and being show as ruthless conquerors driven by greed, and I can understand that to some degree. And really, the makeover of Watto in Episode II is indeed the most racist shit I’ve ever seen outside of Nazi propaganda cartoons.

But no, I am not talking about that here. The problem I want to adress is at the same time less controversial but also much, much farther reaching. Many worlds in science fiction often get accused of being Planets of Hats, where the whole population really has only a single defining trait. Star Wars does that too. And very hard. And all the time. Even ignoring the accents of Neimodians and Gungans and any resemblance they may have to those found in some parts of the world, the entire worldbuilding of Star Wars is based on a way of percieving people and cultures that has a clear and unambigious term: Racism.

Racism, at its very core, is not specifically about discrimination or hatred or limited to any minorities. These are issues that result from racism. Racism itself is the idea that a group of people who share a common ancestry can easily be defined by a few traits that are shared among all of them. So if you have seen one person of that group, you know not only everything about that group, but also everything about every single member of that group. Racism is the idea that shared biological ancestry makes all people of that group the same in several fundamental traits.

And nowhere in fiction have I ever seen this principle applied so consistently and agressively. Though I think it neededs to be added, that this is primarily about the Expanded Universe, all the novels, comics, and videogames that build upon the movies. The movies themselves are relatively free of this since it is rare to ever see more than a single individual of any species other than humans. But in the EU it’s really bad. If you have one character of a species appearing in the movies, even in a really tiny role, that character is almost always turned into the universal archetype for the entire species in all subsequent works.

Take for example the Bith. The Bith really only appear for a few seconds and have no relevance to the plot. They are these guys. 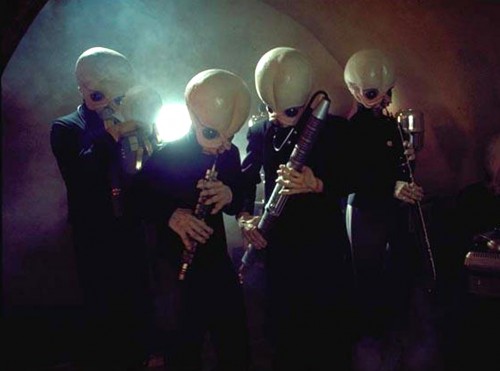 The bar in which Luke and Obi-wan meet Han Solo and Chewbacca happens to have a band of Bith playing during the few minutes they stay at that place. Do we learn anything about these guys at all? No, nothing. Except that these are in a band that plays in a bar. As the EU is concerned, this is everything you need to know about the Bith. Because in the EU, the Bith are a species of performance artists and musicians. All of them. That’s what they are known for throughout the galaxy. When musicians get mentioned, very often they are Bith. It’s like the Bith have a monopoly on playing music for the whole galaxy. 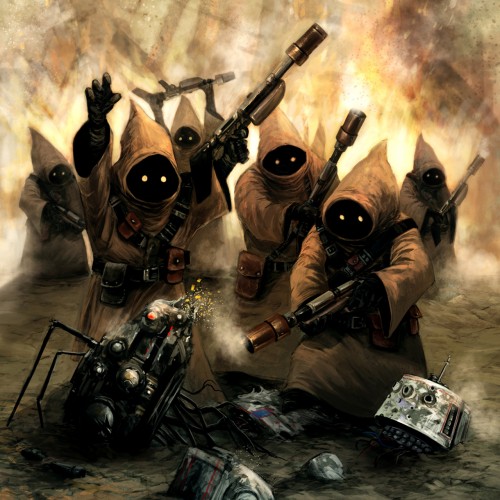 Here we have a group of Jawas. In their natural environment. Shoting at droids to repair and sell them. Jawas have many appearnces throughout Star Wars, but in the movies themselves I believe they really only have one significant appearance. (Other than background dressing.) And they are always surrounded by metal scrap and working on salvaged machines. Most often traveling around in their huge brown, angular trucks. Because in the movies there was one group of Jawas who had such a big brown truck, wore brown robes, and apparently salvaged broken droids to make a living. One group of 10 or 20 individuals. And what they did on that one day instantly became the template for the entire culture and nature of the whole species. You have seen one Jawa, you have seen all Jawas.

And there are virtually no exceptions to this rule. Chewbacca can fix shapeships and droids and in his backstory he used to be an imperial slave. Pretty much all Wookies you’ll ever see are good with machines and the entire species has been enslaved by the Empire. And not just the empire. In the days of the Old Republic, 4,000 years before the Empire, they were being enslaved by the Czerca corporation. Once a slave, always a slave. The whole species.

All Sullustans are good pilots, all Bothans are spies or politicians, all Verpines and Sluisi are great mechanics, all Twi’lek women are strippers, all Trandoshans are bounty hunters, Rodian culture is all about hunting, all Gamoreans are mercenaries, all Hutts are criminal businessmen (…slugs), all Chiss are military geniuses, all Noghri are super stealthy assassins, all Ithorians are pacifistic, all Corellians are roguish pilots with a problem for authority, all humans from Tatooine are farmers. It goes on and on. (And, being Star Wars, on, and on, and on, and on…)

In the Expanded Universe of Star Wars, the basic concept of racism is an actual fact. If just see one member of a species for a few seconds, you know everything there is to know about the entire species and every single individual. I can understand how it happens on a single episode of Star Trek that visits a planet only once, which then is never appearing again. But when it happens over decades and is done by dozens of writers in completely different stories, I find it rather inexcuseable.

Honorable mention goes to my favorite Twi’lek Nawara Ven, who has the distinction of being not some sly gangster but a starfighter pilot/lawyer of unquestionable integrity. But then, being a lawyer does kind of put him into a similar niche as smugglers and spies. It’s just their nature, I guess…