Blood of Elves is the third book of the Witcher, Geralt of Rivia, by Andrzej Sapkowski. Unlike the two previous books that were collections of stories, this one is the first novel, but they all can really be seen as a single series following a common storyline. In The Last Wish and The Sword of Destiny, continuity consisted mostly of regular characters that would travel alongside Geralt for a while and there were several references to previous story. In this book the plot begins to become concrete. Geralt and his friends stop wandering around wherever the road and coincidence take them and start pursuing a common goal. Now they have a purpose. 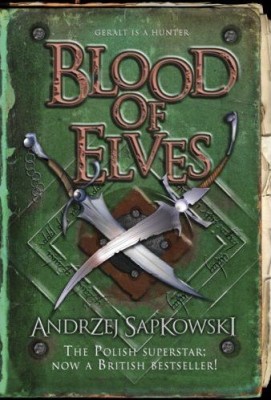 Right from the start it is made clear that this story is revolving around Ciri, a girl whose story began in The Last Wish and who first appeared in person in The Sword of Destiny. The one who is going to be Geralt’s Destiny, even though nobody knows what this is going to mean. But the circumstances of her childhood and previous encounters with Geralt are too strange for anyone to dismiss as coincidence. War is brewing in the Northern Kingdoms. The mighty empire of Nilfgaard has already conquered all the lands in the south and already devastated and occupied Cintra and nobody believes that they are going to stop. To make matters worse, the Nilfgaardians have open support within the Northern Kingdoms in the form of the Scoia’tael, radical young elves and dwarves who are hoping for autonomy as provinces of the empire instead of opression under the feudal lords and kings. Maybe they are impatient or under direct order of the emperor, but many have already begun striking at the human lords and their subjects wherever they can, causing chaos and destruction and forcing others of their kind to pick a side. All nonhumans become suspect and the situation in the towns is only going to get worse for them. In these dark times Ciri is having regular terrifying visions she can neither make any sense of nor remember, and out of ideas the witchers turn to their friends among the sorceresses for help. Meanwhile a mysterious assassin appears in the Northern Kingdoms, looking for both Ciri and Geralt.

The book includes many of the old characters. In addition to Geralt and Ciri, there is of course Dandelion, Geralt’s frequent sidekick on his adventures. Also a major roll goes to Yeneffer, the sorceress Geralt met in the last story of The Last Wish and whose complicated relationship was an ongoing theme in The Sword of Destiny. There’s also the dwarf Yarpen Zigrin, King Foltest of Tymeria, and the priestess Neneke again. First appearing here in person are Geralt’s old master Vessemir and the sorceres Triss Merigold, and we also get introduced to Philippa Eilhart and Shani. There’s quite a lot going on.

However, as it is common for the Witcher, there is not really that much happening yet. This book introduces a lot of information and explanation, and I think there’s only a total of three fight scenes. It is far from being a boring book, though, and it never feels like info dumping. There are a few moments where characters are having conversations and they spell out in several sentences thing that everyone present already knows, and I think it’s often pretty obvious and easy to spot. But these moments are short and happening alongside discussions and debates that feel a lot more natural and not as artifical. You can see when it happens, but it doesn’t hurt the story in the long run.

Blood of Elves is a novel, but it’s written in a way that blends together very well with the previous story collections. There are only seven chapters and each one sticks with only a single character, generally in a single location and a timeframe of perhaps a few hours at most. Then the next chapter follows a different character in a different place, days or weeks later. Sometimes the main character of the previous chapter will be a supporting character in the next. The chapters would not make sense as stand alone stories, but the format is very close to the previous books. It’s very different from any other novels I’ve read but works really well in my opinion. It reminds me a bit of TV.

While I felt somewhat disappointed with the writing in The Sword of Destiny, here it is a lot better again. I think even the best in the series I’ve read so far. Dialogues are well written, characters feel natural and very interesting, and it has lots of really funny pieces of the very dry humor I already loved in the previous books.

So, how is the book overall? Yay or Nay? Clear and unambigous Yay from me here. This is a really excelent book that I think everyone should read who really liked the style of The Last Wish. One of my favorite books I’ve read.