I wasn’t expecting that. There’s going to be a John Carter RPG to be released by Modiphius at the end of the year. 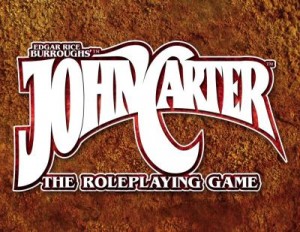 While a bit crude and dusty by now, given that they are almost a hundred years old, Edgar Burroughs space fantasy novels set on Mars had a huge impact on fantasy and science-fiction that surely equals Conan and The Lord of the Rings, even though few people still know about. It’s the primary source that inspired Star Wars to the point that you may call the first movie a rippoff, and it will be instantly familiar to any fan of the Dungeons & Dragons setting Dark Sun. There was a movie a few years back with the unfortunate name “John Carter”, which I think was pretty decent, but got not a lot of notice, and which I am assuming is the reason why this game is named the way it is. Even though I personally wouldn’t have any interest to run a campaign in which said character appears. There is so much more to the world than this one guy, who isn’t a particularly great character either.

Sadly, it’s a 2d20 system game like the new Conan game. It would need a lot of good press to make me want to spend any money on that.