Petty Gods is a book of about 300 minor deities and 100 monsters connected to them, which has been released this month and is entirely free for download. It’s the work of probably about a hundred different contributors, with most simply having contributed one or two gods or an illustration. 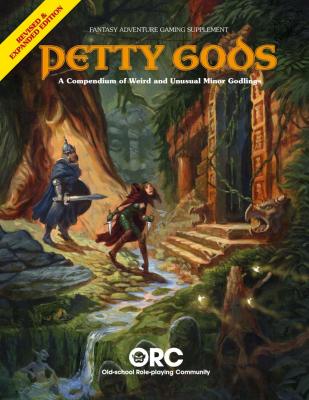 That sounded really interesting to me, as I always love to see an approach to religion in RPGs that is more animistic and dealing with minor spirits instead of continent spanning hierarchical churches. So I gave it a look.

And I have to say I am deeply disappointed. I don’t know what exactly I expected, but from the cover it was very clearly not this. Basically, all the 300 gods are jokes. You got such things as the god of coin debasement, a god of old string, the goddess of dumping corpses under a bridge at night, and about a dozen gods of crossroads. Is this book meant to be a parody? If so, I don’t find it funny at all. If this is an attempt at something serious, it’s a complete failure. If it’s meant as a nostalgic tribute to early D&D, I am not feeling it either.

I have nothing against a bit of silliness in fantasy and RPGs. Many of my favorite works are greatly overstretching any sense of plausibility and two of my favorite words in any language are ludicrous and preposterous. But even the most over the top Sword & Sorcery or Pulp Adventure at the very least takes itself serious and actually means to tell a genuinely exciting story with great themes. But this is not laughing with the genre, this is laughing about the genre. And I don’t find it funny at all.

The one good thing I can say about it is a ten page article by M.A.R. Barker in the appendix, which is about creating religion in realistic fantasy settings. Unfortunately, the good man had been dead for three years when this book was released. If he had had a chance to contribute directly to its creation, it might have turned out a lot better. Or perhaps the article should have been given to the other contributors before they wrote this nonsense.

Since its free, I can just easily delete the file and try to forget this wasted hour of my life, but if you would have to pay for this, I would consider this an exceptionally terrible book. Really can’t recommend it at all to anyone.