Red Tide is described as a “Campaign Sourcebook and Sandbox Toolkit” and even though it tries to do two different things at once, it does a very good job at both. In fact, the two complement each other very well and make this book a lot more than just the sum of its part. Released in 2011 by Kevin Crawford, it is both a short and compact campaign setting as well as probably one of the best guidebooks to creating your own settings for a sandbox game. You could probaby use the Red Tide setting to play a different type of campaign and if you make your own setting you don’t have to use any of the Red Tide elements at all. Each element of the book takes up about half of its pages and are mostly separate from each other, but reading only half the book would do it a great disservice. The Red Tide setting is a great example how the theories and tool from the toolbox section can be effectively used, while at the same time the rules for creating sandbox content really help to bring the setting to life. 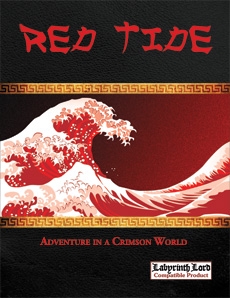 The first half of the book, which has a total of 159 pages, describes the world and background of Red Tide. 300 years ago a red mist appeared that killed the land and everything it, leaving behind a hellish wasteland haunted by terrible monsters. However, a single prophet saw the comming doom and organized a great evacuation with hundreds of ships to an unknown continent in the west. Something in the rock of the mountains that dominate the continent keep the Red Tide at bay, and this cluster of large and small islands may be the only place in the world still inhabited by the living. However, the refugees were not the first people to settle this land, as it was already the land of the Shou, a large collection of numerous tribes of goblins, orcs, and bugbears (though except for their stat blocks they are always simply called the Shou). The human refugees come from cultures that are mostly inspired by the Chinese and Japanese, but there is also another group in the smaller islands to the north that is inspired by Vikings and there are some dwarves as well, and also some elves and halflings. Through a fierce and brutal war, the refugees from the east managed to conquer half of the main island from the Shou and created several new kingdoms, but things are looking far from rosy. Hordes of countless Shou warriors are still in the wild, eager to take back their homeland, while the Red Tide is still waiting out there just beyond the horizon, raveshing the rest of the world. And to make things worse one of the kingdoms has turned to demon worship as a way to escape from their seemingly hopeless situation. While there is a good amount of very intersting history and background, it’s a very compact and almost minimalistic setting when it comes to locations and NPCs. The seven described countries have about two pages each, with another four pages dealing with various other important cultural elements. It’s done with good reason, as the methods of how to populate the world are what the second half is about. There are another 26 pages with information on standard and new character classes, spells, and equipment, and 10 more pages with new monsters and that already wraps the first half of the book up.

As interesting as the campaign setting is, the second half of the book is where the real gold is to be found. The central idea presented by the book is the use of a Campaign Folder. The campaign folder is an actual folder that is meant to be a setting sourcebook which the GM constantly expands by adding new pages with new information to it. Any time something happens or the players do something that changes the world, which in a sanbox campaign should be happening all the time, the GM updates the campaign folder by adding new notes to any locations or NPCs. Between game sessions, the GM also adds new pages for new locations and NPCs, which are already prepared but have not yet appeared in the campaign. The great benefit of this system is that the GM does not have to completely make up everything as the game goes along while not having to decide what to do with each element from the start. If the players have a random encounter with bandits and decide to track a fleeing survivor back to his camp, you can just flip to a bandit camp you already prepared and simply add a note where on the world map this camp is located. If you really want to do a hard sandbox campaign, I can’t really imagine how you could possibly manage it any other way.

The next 50 pages are basically tables to randomly generate ideas for interesting locations or encounters. Usually I hate these, but in this case the ideas are actually really excellent. The reason they take up so many pages is because each item on the lists comes with plenty of useful explanation and elaboration. There are four types of sites: Court Sites, Borderland Sites, City Cites, and Ruin Sites. However, they are not so much about describing places (and maps don’t enter the picture at all at this point), but all about describing the kind of people and situations you’re going to encounter there. Court Sites are any places where a group of powerful people comes together. Which can be the court of a noble ruler, but also the estate of a wealthy family, a wizard school, a great temple, or the backroom of a cheap tavern where the local gang bosses tend to hang out. Each type of court has a table with 10 types of important people, 10 reasons why these people do have power in this court, and 10 additional minor NPCs who have a strong personal bond to the important people. For example, in a Temple you might have a “slightly heretical scholar” who “comes from a powerful family” and has some kind of connection to the “cook”. Within a few minutes you can randomly create one to three such NPCs as well as selecting one of ten conflict types they are currently involved in. It’s very bare bones, but the combinations are often interesting enough to create a solid inspiration for a whole conspiracy or murder mystery with just a few die rolls.

Borderland Sites are small villages, manors, or strongholds in the wilderness. Their exact nature can easily be decided by the GM, but the book offers 40 ideas for a current problem that plagues the site. Each pf these offers a number of suggestions of additional elements, like possible allies or enemies for the players, or special circumstances that complicate the situation or may be useful to solving the problem. For example, you could have a fortified outpost that is suffering from a hidden demon cult that meets in an abandoned temple to a forgotten god and the players get help from a traitorous cultist, but it turns out that the cults magic is actually the only thing that keeps the outpost from being overrun. Instant adventure plot, takes only two minutes. Not a complete adventure, but a solid hook that can be quickly made into one. And since in a sandbox game any possible outcome can be worked with, experienced GMs might even be able to do it on the fly. City Sites work basically the same way, but have their own list of 40 possible plot hook generators.

Finally there are the Ruin Sites, which are usually dungeons, but also inhabited by one of 20 possible groups of people, which each come with six or eight ideas for a twist that makes them more than just a random group to fight. It could be a group of necromancers who believe the tomb of an old great necromancer to be somewhere in the ruin and are trying to find his tomes that might be burried with him. It would be up to the players to decide if they want to stop them, help them, or perhaps even steal the tomes for themselves (if they are actually there at all). And there would likely be some random monsters in the ruin too, which the necromancers might be able to help the players with, or the players could use to kill the necromancers. Since there isn’t any real plot, the possibilities are endless and it’s entirely up to the players what they want to do, which is the great charm of a well done sandbox.

And that’s really what separates a great sandbox campaign from a pure dungeon crawl campaign where the players can pick which dungeon they want to crawl. There are a few paragraphs on quick and dirty map making, but it’s generally a topic Red Tide doesn’t concern itself with at all. This sandbox toolkit is to create roleplaying situations based on social interactions, not on generating random dungeons to plunder. And that’s what really makes it such an outstanding book. You can get advice on map making everywhere, but actually running a game is something very few people ever bother adressing (probably because they don’t really know either). And that is also why it’s not only a useful book for people who want to run pure sandbox games, but any GMs who want to run campaigns that are not strictly plotted out in advance and allow the players a great amount of freedom which paths to take to the great goal of the campaign and how to interact with the people they meet along the way.

At 6.50€ for the pdf this book is a steal and there isn’t really any question whether my call is yay or nay. Clear yay! from me. Get this one, it’s really as great as its reputation. If not even better.