Over the past couple of days I was rereading the old Forgotten Realms supplement The Savage Frontier. Released in 1988, it was one of the very early Realms product that expanded upon the original Grey Box set. Waterdeep and the North had been released the previous year and The Savage Frontier greatly expanded the “and the North” content. I got into RPGs and Dungeons & Dragons much later with the Baldur’s Gate videogames and when Neverwinter Nights followed four years later, there was a very active German scene of homemade online games based on that game. And for reasons that always have eluded me, that German scene was almost completely in line with the North sub-setting of the Forgotten Realms. I think there were about a dozen or so big servers and almost all of them had their game world set somewhere in The North. That was before World of Warcraft and we playing online with 20 people in the same game at the same was quite a big deal back then. We played that a lot and I even became one of the admins for the server I played at. Since I was good with the level editor I did quite some work on expanding the game world with new areas and dungeons. And if you think RPG geeks are obsessive about canon and accuracy, remember we were German RPG geeks! So I had to know all the source material inside out! Which I very gladly did.

The 3rd Edition Forgotten Realms Campaign Setting was very brief on The North and Silver Marches wasn’t really covering the area we were building on. (Looking back, we were way too obsessed with realism and the world would have been much better if we had skipped all those huge outdoor road maps and focused more on actual adventure sites.) So our main source was the 1996 box set The North for 2nd edition. I also got The Savage Frontier on ebay, but being young and stupid and obsessed with detail, I found it very lacking and much to short and brief and didn’t really pay it any attention. It was kinda cool, but The North is about five times its size and more detail and more up to date information is always better, right?

The past couple of years I’ve been doing quite a lot of work with my own Ancient Lands setting and been doing a lot of research on what other settings did right or wrong, and I also did a complete 180 from d20 games and fully embraced rules light games. Both led me to greatly appreciate the older editions of Dungeons & Dragons and take a more serious look at the 1st edition Forgotten Realms material in particular. And as the very first outline of my Ancient Lands setting was “The High Forest, 4,000 years in the past”, I also came back to The Savage Frontier and gave it another close look. 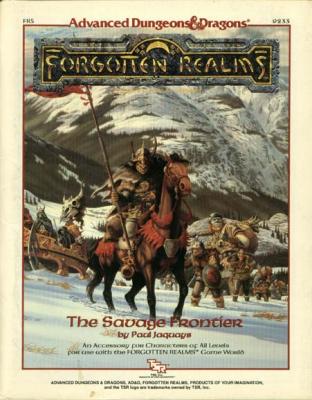 And I have to say, I now actually greatly prefer it over The North, even though it’s much smaller. But for the last years I never really was sure why I like it more and what it actually does better. Having read the wonderful thread Let’s Read The Known World – ALL of it by Blacky the Blackball and NPCDave, I dug up The Savage Frontier another time to read the whole thing and compare to how things changed in the later versions of the sub-setting I am much more familiar with.

First thing I noticed is that it is really very short. 64 pages plus maps, you can read the whole thing in one go. But at the same time, it is still a complete setting. You could perfectly run a whole campaign with it that runs for years without having the main box set or even knowing anything about the rest of the Forgotten Realms at all. The only thing that is missing are the descriptions of the gods, but these don’t actually play any role in this sub-setting and all you need is a post-it note that tells you which domain each of the listed gods has. This book doesn’t tell you how everything works, it just tells you what it is called, where it is located, and what its purpose it. That really are the most important parts a GM needs to know to be able to create some own content based on it. The exact amount of orcs that inhabit a fortress and the name of their chief and the level of their shaman really are not that important or barely relevant. By letting the GM come up with these things the setting becomes actually more usable. You think it might be a good idea to have the party sneak into a goblin lair and fight their chief? But the PCs are only 3rd level and it says the chief has 12 HD and is always guarded by twenty warriors with 4 HD each, so that’s not really an option. We’re actually better off when these things are left to the GM. As a result, the descriptions of towns, dungeons, and regions are usually very brief, rarely more than a short paragraph or two. The Savage Frontier may be short, but it’s long enough. 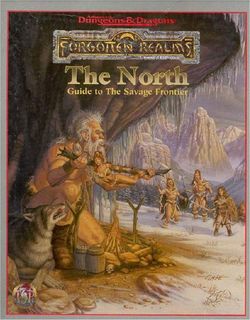 I then also got The North back out to compare it and try to figure out how it’s different. And there are really two main difference that strike me as the most significant.

The first one is the art. And art matters a lot. The outer covers are very similar and the one from The North is very much in line with the feel and presentation of The Savage Frontier. The interior art is completely different. Virtually all the interior illustrations do not show wilderness environments and barbarians in fur cloaks and loincloths, but are all about big castles and soldiers in pretty uniforms, nobles in fancy dresses, and happy farmers in their quaint villages. After thinking of a good description for a few moments, the best analog that comes to my mind is old Robin Hood movies. Or Prince Valiant comics. And I am not talking about Kevin Costner or Russell Crowe Robin Hood. I mean this guy: 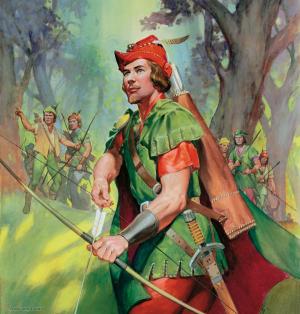 That’s very different from what you see on the cover or in The Savage Frontier.

The other factor is scope. There is so much more detail and description in The North that the region feels very crowded, which is of course reinforced by the art style. The result is that the setting feels completely different. In The Savage Frontier you get the impression of this vast wilderness that is almost completely depopulated and the home of orcs and giants. A place with just a few Points of Light of civilization and nothing but a few crumbling walls and dark stairs leading into the ground as the sole remains of the great realms that once existed there in the distant past. In contrast to that, The North feels like Sherwood Forest. Or even the Shire. A pretty peaceful place where exploring old ruins is kind of an idle hobby with plenty of quaint farming villages with cozy inns and happy merchants. They turned the Lonely Mountain into Hobbiton. A cruel Sword & Sorcery setting turned into a ren fair show.

Third edition Forgotten Realms was an entire different can of worms. Of course I loved it when it came out and for many years after, but third edition D&D is its own very unique type of fantasy that doesn’t actually resemble 1st Edition AD&D and BECMI at all. It’s much more an evolution of Dark Sun and Planescape. Which are the two coolest RPG settings ever, but they are very special cases. Certainly not templates for generic medieval fantasy.

Since I’ve created my own setting inspired by The Savage Frontier, I am probably not going to use it for any actual campaigns in the future. But I still like to get it out again and read its two-sentence dungeon description and have them further inspire me with great ideas I can develop into something much bigger and more complex for my own world. Just as it was intended.