A couple of weeks ago me and a few others threw around some random ideas for the Ultimate Retro-Pulp Fantasy Setting. It didn’t get very far, but even with the little we got it’s already a really cool setting I really would like to use for a couple one-shot stories or adventures.

To begin with, we have planet with a giant moon, which is the home to amazons and dark elves, who occasionally come to raid the planet riding on giant space whales.

On the planet there are the evil serpent men and the island empire of Talantis. The Talantians also build air ships, which can fly to the moon as well. There is also the great dragon sorcerer Tyrannosaurus Hex. Hawk Men are one of the minor races that inhabit the planet. There are also giant apes and dinosaurs. 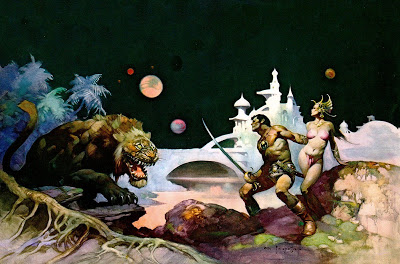 The moon would be even more hardcore and dangerous and only for experienced heroes. Below the surface live the dangerous Generic Brand™ Mind Flayers.

Regarding religion, the true gods are totally weird and alien beings from a different plane of reality and beyond human comprehension. There are lots of temples in all the cities, but only the high priests really know what kind of thing they are worshipping. Gods don’t intervene and don’t reveal themselves to normal people.

Colossal stone bodies cover the landscape and are the remains of titans, who were very powerful, but not true gods. There also is no real difference between a sorcerer and a priest, their magic is all the same thing.

Based on all these things, the tech level for weapons and armor would best be Antiquity. No knights in plate armor or samurai, or anything like that. That means chainmail, dragonhide, breast plate, and boob plate.