At the Giant in the Playground forum, I regularly take a look at the first outlines people have written for their own fantasy settings, either for RPG campaigns or other things like novels or webcomics. And much more often than not, these outlines start with how the gods created the universe, some war of the primordials, and the interference from hell. Which isn’t a completely stupid idea. When wondering where to start, why not start at the beginning? But I think in practice this approach to creating your own fantasy world is a rather poor one and won’t really get you anywhere. 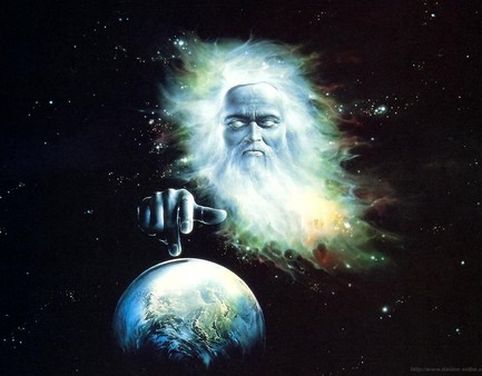 Effective worldbuilding does not start at the beginning, but at the end. Unless you are creating a world just for the fun of creating a world, you have some kind of specific purpose for your world in mind, and usually also some general idea for it’s style. When worldbuilding is a means to an end, then it’s really the end where you should start. First think what kind of world you want to have at the end of your timeline. Think what climate you want to have, what kinds of people inhabit the world, what forms of societies and cultures there will be, and what the major themes will be around which the adventures of the characters will revolve. Only when you have established these things does it make sense to think about the origin of the world and the mythology around it.

Or you could even skip it entirely and don’t bother with a creation myth at all. The world of my Ancient Lands setting is billions of years old, but the history only covers the last 4,000 years. Because in the vast majority of fantasy settings, the events at the beginning of the world don’t have even the slightest impact on the current events. So why do so many people bother with it? As with almost every established standard in modern fantasy: “Because Tolkien did it.” It is true, Tolkien spend decades on working on the creation and mythology of his Middle-Earth setting. But at that time, Tolkien was one of those people who did create a mythology purely for the fun of creating  mythology. At that time he wasn’t working on a setting for a novel, movie, or roleplaying game. Later he did write two novels and set them in the world he had already created earlier: The Hobbit and The Lord of the Rings. But when you look at these two books, how much of the creation myth and ancient history of this world gets actually mentioned in them? Virtually none. There are some occasional sprinkles of references to the heroes of the First and Second Age to create a more mystical atmosphere, but the books don’t bother with explaining who these people really were and the events they were involved in. Because it doesn’t matter. Sauron created the rings and made the human kings his slaves, that’s all you need to know. You don’t need to know that Sauron, Gandalf, and Saruman are actually demigods who have been around since the beginning of the world. And you don’t need to know the story of Gil-Galad. He was the master of Elrond and died in the last battle with Sauron. That’s all you need to know, so that’s all you’re getting told. And keep in mind, this is for a story that is actually a major episode in a much larger chain of events that shape the entire world.

Unless you are making a world that is meant to be the stage for stories about the gods and the war between heaven and hell, mythology doesn’t matter. Take for example Robert Howards Conan stories or any campaign set in the Forgotten Realms: How often does the creation of the world and its early history come up in the plots or even gets mentioned? Howard occasionally drops mentions of the ancient realms of Atlantis and Archeron, but never bothers to tell anything more than that they once existed and eventually ended. In the Forgotten Realms, you might have an adventure where you get to find some magic item in an old ruin of the elven Crown Wars or the lost dwarven empire of Shanatar, but those are just decorative touches. The audience/players don’t need to know about the whole history behind it and even if you would try to tell it, they most often just get bored and don’t remember any of it once the actual story picks up again. And how was the world created? Who knows? And who cares?!

When starting an attempt to create a fantasy world, do start at the end. Begin with deciding what style you want to have for your world and how you want it to be in the present day. And only once you’ve created a clear and solid framework for your world should you start to spend some thoughts on how the things became as they are now. This is a step that I think is done best in the middle of the process of creation. Don’t put it off until the very end when everything else is mostly finished (or at least as finished as a fantasy setting ever gets), because then you have the option to make events in the past actually leave an impact on the world as it is now.  Having a few events in the recent decades and centuries that still affect the conflicts of the present day is a great tool to make a world seem much bigger and complex than it actually is, and just generally more believable. But very rarely is it worth to go back more than a thousand years at the most.

Starting at the beginning and then seeing where it might lead to is an approach I very much recommend against. In my experience, it’s a way that almost always leads to worlds that are very generic and interchangeable without anything really interesting about them. First decide where you want to go to and then start thinking of how you are going to get there. If you love stories about gods fighting and creating mortal empires to serve them, then make a setting in which the present day is set in these times. If you create all these stories, characters, and places, but place them ten thousand years in the past, most of that work would be for nothing and probably nobody ever hear about it. Don’t write for the past. Always write for the present.

Update: Berin at Asparagus Jumpsuit wrote an article that adresses the same issues as I was talking about, but talks more about the things a setting needs to have instead. Instead of making another post about basically the same thing, I just link to his one here.

One thought on “Forget about creation myths”