Sword & Mythos is anthology of stories released this year by Innsmouth Free Press. The ebook version had cost me only about 4€, which I consider fairly cheap. The introduction describes the concept behind the collection as “Lovecraft meets Howard and Moorcock” and there is an additional essay in the end of the book that shines some light on the relationship between Lovecraft and Howard and how they put occasional nods to each others works in their stories. The Primeval Thule RPG setting which I bought just a few weeks ago is based on the same premise of the works of these two great writers being set in the same world and the result works brilliantly. I am big fan of the short story format, especially in its pulp era incarnation (so much easier to digest with ADD than huge multi-volume novels that take you weeks to finish), with both Howard and Lovecraft being among my favorite writers. As a huge fan of Sword & Sorcery, the idea of S&S with lovecraftian horrors had me very excited. The Scarlet Citadel and Iron Shadows in the Moon are probably my two favorite fantasy stories. 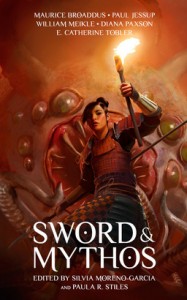 So just the title of this collection had me excited and the cover looks really exciting and promising. Unfortunately, this cover lies. The Chinese warrior woman does not appear in any of the stories. Neither does the monster. Nor Sword, nor Mythos to tell the truth. If I simply had picked up the wrong book and misunderstood what I was buying, I might see things more lenient. But this book makes it very clear both in the introduction and the essays, that this is meant to be a collection of stories that blend the Sword & Sorcery of Howard with the cosmic horror of Lovecraft. And it just doesn’t deliver that at all!

The influence of Howard on these stories is pretty much zero. There is absolutely nothing anywhere in this book that in any way gives even the slightest nod to Howards Hyborean Age or the Sword & Sorcery genre in general. Sword & Sorcery is all about adventure, excitement, and action, and almost none of the stories in this book have any of that. So what you get is a couple of attempts at Lovecraft in other historic settings. One is set in the time of King David but all the others appear to be set between 500 AD and today. Now, I could have been happy with lovecraftian stories from other corners of the world and historic periods, but even that the book does rather poorly. It appears to me that most of the readers have never read Lovecraft, and if they did, don’t understand what they are about and how they work. In most cases, the only connection is some name dropping of Dagon or Shub Niggurath, but in rather inappropriate contexts. In these stories, the Great Old Ones are never treated as great cosmic forces whose mere existence seems to defy all the laws of nature, but instead just as some regional nature spirit like any other. One character even has something like a star spawn or flying polyp as her spirit guide, and she is not some raving cultist but a respected spiritual leader of her culture.

Even ignoring the failure at emulating either Howard or Lovecraft or even just paying homage to them, most of these stories are rather poor. They seem to fall into three general categories: The first group are “entries” that are only 2 to 4 pages long and consist of nothing but cryptic monologues without any kind of context. I find these just terrible. Is that an attempt at highbrow art? No, just no! The second group is longer, but the stories also consist mostly of cryptic rambling with no clear idea what they are about or something clearly identifyable as plot. Best case, these writers try to create a fake appearance of depth by intentionally withholding important information to keep the reader confused as he is unable to make sense of anything that is going on, even though the protagonist knows these things. At worst, the authors themselves have no clue what’s going on and don’t feel that they would need to. Either case is bad writing. Lovecraft often left things ambigous, but he almost always started his stories by explaining who the narrator is and where the story takes place, and then step by step reveals additional information in the order that explains why the protagonist did things as he did. In the end, you may be wondering why it happened and how it could have been possible, but it is always explained what happened. Simply half-arsing it and leaving things unfinished is no replacement for that. Last are those stories that at least try to create some kind of adventure or exploration narrative. Unfortunately, most of them are very weak. When monsters are encountered they are easily slain in 3 sentences and at no point does their appearance give the characters any pause or real concern. It is true that Lovecrafts stories were written in a mindset that was deeply atheistic and even nihilistic but confronted with scientific discoveries that seemed to defy the rational world of our everyday experience. For characters who believe in the existance of spirits and other realms of existance without any doubts, the sight of magic and monsters would be nothing that shakes their image of the world. But as I see it, the point of the lovecraftian mythos is, that religions and mythology are merely feeble attempts of humans to assign some form of logic to these beings that makes sense to their minds. But seeing the real thing up close and having it reaching its tentacles at you is something that even in the mind of a believer of gods and fey should not exist. But instead we get Deep Ones and the Young of Shub Niggurath and the characters merely show a bit of displeasure at their ugliness. That’s not what the mythos is meant to be.

There is one silver lining though, the very last story in the book. The Sorrow of Quingfeng turned out quite good and Greg Yuen seems to be the only one involved with this book who actually is a fan of Lovecraft and understands his stories. Really the best way to describe it is as “a Lovecraft story set in old China”. This is a great homage and the kind of story I had expected from the whole collection. It’s about an old court official who is writing a report of his extraordinatry experiences during his last assignment. He begins with explaining who he is, how he heard of the strange events that led to his investigations, and the peculiarities of the remote region he was visiting. There he meets a young local officer who is to be his assistant and together they start investigating the disappearance of an entire mountain village, which leads them to horrifying encounters with things that should not be and forces them to overcome their fears in a daze of shock. This is classic Lovecraft right there! Not only does Yuan mange to capture the style of Lovecraft, he is also one of very few contributors to this book who tries to add some touch of Sword & Sorcery to his story by giving the second protagonist Wuxia style fighting skills. His final sacrifice (not a spoiler if you know Lovecraft) is not with a pack of dynamite, but with a combination of cold steel and his chi. The story seen just by itself is decent, though not amazing. But in an attempt of recreating Lovecraft in a different part of the world, this story does an excelent job.

However, no matter how much I am pleased with this one story, it does in no way change the fact that this book is overall rather bad. Swords & Dark Magic had at least 5 decent stories of considerable length. This one has only a single short one that didn’t feel like a complete waste of time.