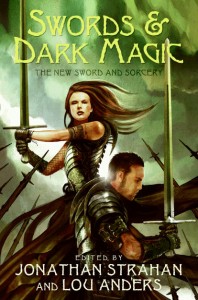 Swords and Dark Magic – The news Sword and Sorcery is an anthology released in 2010, consisting of 17 stories in the style of classic Sword & Sorcery. It got pretty decent reviews and ratings, and with most of the big names of the genre being quite old already (Conan even made it into public domain almost a decade ago), I was quite intrigued to see what current authors have to offer as their personal take on it. I have to say that my personal knowledge of contemporary fantasy writers is very superficial, but even I have certainly heard of such names as Steven Erikson, Glen Cook, Michael Moorcock, and Joe Abercrombie. Since each story is by a different writer and was created independent of the others, the only sensible way to review them in detail is to do them each separately. I will keep it mostly spoiler free, but still point out specific things that I consider worth special mentioning.

Goats of Glory by Steven Erikson: This first story is about five mercenaries who seem to be the only survivors of a big battle who just barely made it back to inhabited lands and arrive in a small village so tiny and remote that even the locals have no idea what country they are in and who their lord might be. Pretty much everything about the village and its inhabitants is disgusting and for most of the story we get to see these rather unpleasant people resting at the local tavern after their exhausting escape. As night approaches the tavern owner directs them to the ruined keep at the edge of the village since their are no rooms or beds for visitors in that dump. And clearly both the tavern owner and the local gravediggers are quite anxious to see these unexpected visitors to put up their camp there for the night. Of course, things turn out to get a lot more complicated.

Maybe I am just spoiled with using Tolkien and Howard as my main references, but when I read fantasy stories, I expect rich descriptions of people and places. Both are unfortunately missing in this one. Another thing that I consider important for Sword & Sorcery short stories is to get to the point quickly and telling the reader what the story is about. Why do I care what these people are doing? Again, this story fails to deliver an answer, and for about two thirds of it I am just watching unpleasant people doing nothing. In turn, the remaining pages of the story hurry through the actual mystery and exciting events, even though a lot more could have been done with it. So far, a disappointing start.

Tides Elba by Glenn Cook: This story is about the Black Company, of which I have heard, but don’t know anything about. It’s about a group of mercenaries whose save and easy asignment of guarding a city gets distrubed by the arrival of one of the six powerful sorcerers of their mutual enigmatic boss. He simply is delivering the company new orders, but there seems to be some really bad history between him and them, which makes the mercenaries afraid something really bad is going to happen to them. The orders are simple enough, find and capture the rebell leader Tides Elba, but something about the whole thing seems very fishy.

It starts relatively simple with a group of mercenaries (again) sitting in a tavern playing cards and killing time (again). But as the story goes on, things are getting increasingly confusing. The mercenaries are afraid of the sorcerer and believe he is setting up to destroy them, but the story doesn’t tell us why. They find one of his notes that deeply disturbes them, but we’re not told what’s on it. Then they make copies of it and hide them, then have their wizards magically whipe their memory of ever having done so. But again, no explaination is given why and for what purpose. And then the conspirators who appeared to be old and trusted friends turn out to be actually hating each other, with no reason given. And apparently the fate of world is in danger, but we’re never told what’s the story with that either. There clearly is a big plot going on between the characters and they are hatching a cunning plan to outsmart the sorcerer. But the reader is never let in on it and even at the end when everything had played out, I still didn’t know what they were trying to do. To make things worse, this story is bad at descriptions either. Apparently some of the mercenaries are not warriors but wizards, but that remains entirely unclear until someone is suddenly casting a spell. One of them has been with the company for over a hundred years, which is mentioned multiple times, but there’s never any information on whether humans normally live that long in that world or if he is a dwarf, or anything like that. The worst offender is the main character and narrator, of whom I don’t know anything. I think the characters name is Croach or someting; I believe it is mentioned once towards the end. Not only do not know the rank or position, I am not even able to tell if the character is a man or a woman. This isn’t good either.

Bloodsport by Gene Wolfe: This story follows a man and a woman who were raised to be warriors in some weird game that combines gladiator combat and chess. This is already a really stupid idea that could ruin a good story all by itself. They end up wandering and the woman is looking for some kind of prophecy and eventually they come to a magical cave. This story reads like watching a movie in fast forward. You are able to tell that there are two characters that show up through the whole story and are apparently relevant to the plot,that the action moves between six or so different locations, and that it’s apparently some fantasy world with swords, spears, and horses, but you never have a clue what any of it means and what’s going on.

I really hate repeating myself, but again the story is completely lacking of any descriptions. The previous two stories had very brief and sparse information on where the scenes are set and what kind of environment the characters are in. This one manages to do nothing at all. At one point it’s in an area (I assume), then in a house in a destroyed city, then somewhere in thr countryside, and suddenly in a forest. There are never any transitions or anything establishing the scene. Plot also is completely nonexisting. And as I seem to have to say over and over, things are only starting to get interesting, at least as much as the word applies here, in the last third. The first two thirds could simply have been summarized in two sentences as a “how we got here”. This story is terrible. It is complete garbage. This one is just shit.

Hopefully the next three stories will be a lot better.