The two books contain 15 stories, which were mostly written between 1939 and 1963, with the remaining four written in 1970, presumedly specifically for the inclusion in the collections, that were released the same year. Two other collections with stories mostly written during the 60s had been released two years earlier. There might be a possibility that these stories from the 60s are what fans consider the prime of the series, and that the two books I read where just the leftovers that were published to follow the success of the two previous collections. When your name is popular and you have ready material lying around, that’s a perfectly sound thing to do. But it’s the stories from 1970 I have the greatest problem with, and I think it’s unlikely that a writer would completely change his style in just two years. And while yes, the four stories from 1970 may have been rushed to get the two new books out, I still believe that after reading through these two collections, I have now a pretty good picture of the series as a whole. 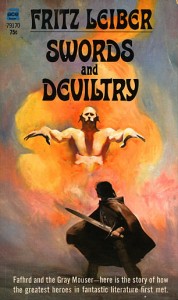 And as I have already let shine through, it left me quite underwhelmed. Swords Against Death is really not a good book. Swords and Deviltry is a terrible book. I am not terribly well read about fantasy fiction from the early to mid 20th century, but I read most of Howard and Lovecraft, as well as Burroughs A Pricess of Mars, which share the same format and target audience. And compared to these famous authors, I find Leibers writing quite wanting. It might be unfair to compare an unknown novice writer to the best in the genre, as he has been when he wrote his first stories, but from everything I heard about him, Leibers fans seem to put him on the same illustrious pedestal as them. And there I really don’t see him. Not even anywhere close! 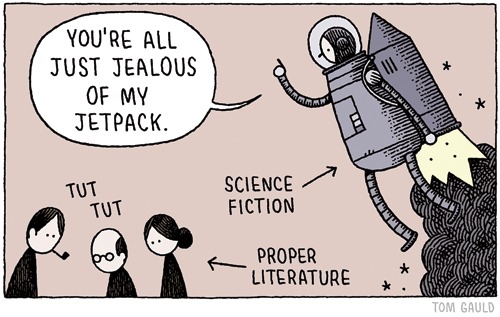 Now I have a very low oppinion on literature critics and even though German literature was one of my two primary subjects during my last two years of school, I know pretty much nothing of the categories and terminology by which critics analyse and compare books. And while i read quite a lot during my life, virtually all of it is what literature snobs would call trash. (Though the actual term they are using around here is trivial literature.) But in this case, I really don’t have any trouble recognizing genuinely bad writing and identify the worst offenses. What has been striking me the most right from the start is a severe lack of descriptions. Fantasy lives and breathes fantastic or even just spectacular or evocative environments, as well as characters and creatures that are telling so much about themselves and their world even without saying a word. This is completely missing from these stories set in the world of Newhon. I read 15 stories and still the only thing I know about Fafhrds appearance is that he is tall and has red hair. The Gray Mouser comes down to being small and dresses in gray. The people they are dealing with are either fat, or have a black beard, but that’s as much description as we get. With environments it’s even more sparse. Another problem is Leibers language which he uses in the stories. Language changes over time, but Howards writings are two decades older and Burroughs even twice that much. And Leibers choice of words is deliberately archaic, and it doesn’t work out well. As a result, dialogs are very stilted. Probably the biggest offense in the stories is Leibers style of structure and pacing. Very often the first half of the story has nothing happening at all, and all that does happen is almost entirely irrelevant to when the actual adventure begins. Now no writer should slavishly cling to established conventions and imitate others when he thinks his own way works better for his stories. But other writers of the fantasy genres who use a similar short story format tend to start the story where the action begins and mention the events that lead to that point only in a paragraph or two, and for very good reasons. Now I admit that Lovecrafts stories consist almost entirely of buildup and have the action scene at the very end, and in some of the stories it appeara that Leiber might be trying such a thing as well. But in that case the buildup needs to consist of information that we will later need to understand the significant of the big reveal at the end, or in other words, actually build something up! In Leibers case, it tends to come off as padding. And that leads to what is by far the biggest mistake: The actual mystery, which the two heroes don’t know anything about yet, gets told in it’s entirety by the villains while the protagonists and the reader sits down and listens to a lecture. Then after the villain has told his complete lifestory, evil plan, and means to defeat him, we get a half-page fight scene and the story is over. “Show, don’t tell” may be an overused phrase that is often given way too much weight, but in this case it really nails down the problem. 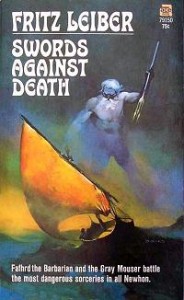 This all can be excused, if the actual story that is being told, is a compelling one. Which these ones simply not are. You can’t shine shit. Even if you had a writer who is good at structure, pacing, and evocative descriptions, these stories are still bland. Think of the movie Avatar. Yes, it’s really pretty and looks gorgeous, but once you scratch the paint on the surface, there is nothing below it. As I see it, if you are an aspiring writer and look up some guides of common beginners mistakes that can easily avoided, Swords and Deviltry is the only sample material you need to find all of them in action, easy to spot. There is much more wrong with these two books, but that would be specific scenes and dialogs and would drift into nitpicking, so I am leaving it at these general issues from which the series suffers throughout all the stories.

If this is what many people seem to consider one of the Grand Masters of Sword & Sorcery, then I can now really understand why the genre has been suffering so much under a reputation of trash. I always assumed it’s the violence, whoring, and nihilism that offended “propper” critics, but it seems that even ignoring that, the writing is still bad. To anyone who wants to try Fafhrd and the Gray Mouser anyway, I recommend picking up Swords in the Mist and Swords Against Wizardry. Those are hopefully not quite as bad as Swords and Deviltry and Swords Against Death.