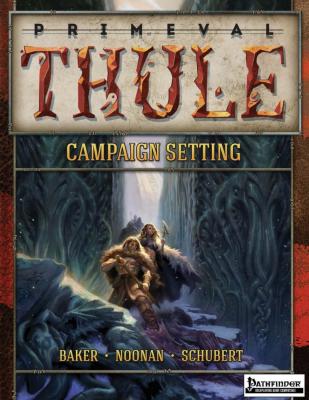 However, I want to argue that there are in fact many works that have all the relevant traits of Sword & Sorcery and also nonhumans, and in which the inclusion of nonhumans doesn’t in any way conflict with with those essential elements and themes.

I admit, most of these are fairly recent. But just because something is not found in the oldest works doesn’t automatically make it incompatible with a genre. It still walks like a duck, swims like a duck, and quacks as a duck.

Damn you, Richard Baker! Did you steal my notes?

While browsing around on my continuous search for inspirational material for my Ancient Lands setting, I stumbled on Primeval Thule, a new RPG setting by Richard Baker, David Noonan, and Stephen Schubert that had a Kickstarter last year, but never really got a second glance from me. The final version was completed and released just last month, and with the 272 pages pdf being only 15€, I decided to make the gamble and give it a try without any helpful reviews of it being around it. And it looks good. Really good. You might even say too good!

Just after the first two pages I was starting to get a William Gibson moment. The story goes that Gibson was just in the process of finishing up the last touches on his groundbreaking novel Neuromancer, went he went to the theater and watched an obscure sci-fi movie called Blade Runner. And realized with a shock that he was seeing almost exactly the same thing as his own original and entirely new vision. Primeval Thule looks a lot like the outline for my own Ancient Lands setting on which I have been working for the last four years. A large, mostly unexplored continent of wild forests, where humans have arrived just 300 years ago, finding a world inhabited by the remains of the kingdoms of elves, snakemen, rakshasa, and cyclops, with much older and stranger beings slumbering underground and the weapons and armor technology being primarily bronze. Replace “cyclops” with “mountain giant” and make the elven kingdoms still powerful, and the description matches perfectly with the Ancient Lands as well.