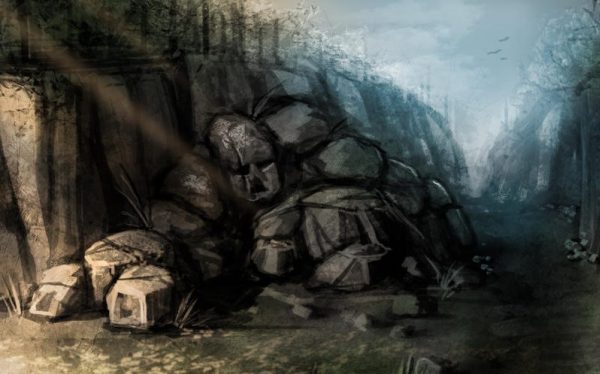 Throughout the vast reaches of the Dainiva Forest rest the ancient and overgrown remains of massive stone giants. Sometimes found slumped against a hillside, sitting slouched among the trees, or lying face down in a river, these silent golems offer scarce insights into how they got to their final resting places.

Even though often heavily weathered, missing large pieces, and covered in moss and lichens, each of these golems seems to have had a unique appearance, with no two known examples being the same in size, proportions, or the stone they are made from. Some appear merely mishapen hunks of rock whose blunt arms and legs only distantly resemble a person, while others show great amount of carving and chisseling to give them simple but distinguishing faces and hands and the proportions of a roughly hewn statue.

The origins of the golems is a mystery lost to time. The clans of Dainiva and the surrounding lands have no stories of their creation, or even about them being encountered alive. As far as everyone knowns, they have always been sitting motionless under the canopy of the forest. With no way to tell their original purpose, they now only serve as landmarks for the occasional hunters making their way through the forest.