You know all these kids these days, with their battle maps, miniatures, and VTTs? I think it’s one of the worst aspects in which RPGs have gone into the completely wrong as they developed, following right behind the total mistake of adventure paths, campaign books, and “telling a story” (the curse of Dragonlance).

Now I am not that old. I actually played way more videogames than I’ve run RPGs in my life, and been doing it for much longer. Baldur’s Gate was my first introduction to D&D, and in my early days as a GM I spend way more time as one of the admins on a German Neverwinter Nights server than playing at a table with my first group. It’s not that I am opposed to any of that on principle. But in my opinion, when it comes to playing an RPG with character sheets and dice, and having a thinking GM running the show, all this stuff like highly detailed battlemaps and fancy looking tokens don’t actually work as visual aids, but instead are serious distractions from the game.

This also doesn’t have anything to do with 5th edition or how kids these days are playing the game. The whole issue goes back to at least the launch of 3rd edition over two decades ago, when the game was designed from the ground up to revolve around position markers on a square grid. (Which was a really strong incentive to entice players to give the publisher more money for miniatures, which were already a money printing machine for Warhammer at that point.) But it seems to me that even with 5th edition significantly cutting back on that as the game mechanics are concerned, all the tools available to make very impressive looking maps yourself, various brands of plastic dungeon floors and walls being around, and the ease with which people can show of images of all swag (I know, “old man”…) seem to have made all this stuff much more prominent.

But my stance is that all this superfluous stuff does not make your campaigns better, but instead detracts from them. It might very well be that this perception is impacted significantly by how ADD affects the brain processes information, but to me, highly detailed battlemaps or fancy toy soldiers don’t inspire my imagination. Instead, they lead to a greater abstraction and create distance and detachment from the scene. I am very much in favor of running adventures with basically an empty table. To me, the table is a surface to roll dice and put your papers down to write. Indoor maps can – and should – be nothing more than a simple sketch to communicate the general layout of the area when explaining it verbally woul be too cumbersome, and regional maps are best handled as props in the form of sheets on paper that look like someone in the game world drew them by hand.

The less visual input you get from stuff that is on the table, the more the mind is encouraged to create an environment in your head that reflects the details in the GM’s description of what you see. At least in my own personal experience, when you shove tokens around on a square grid, you start perceiving the encounter as a logic puzzle that is to be solved by computing an optimal sequence of moves. 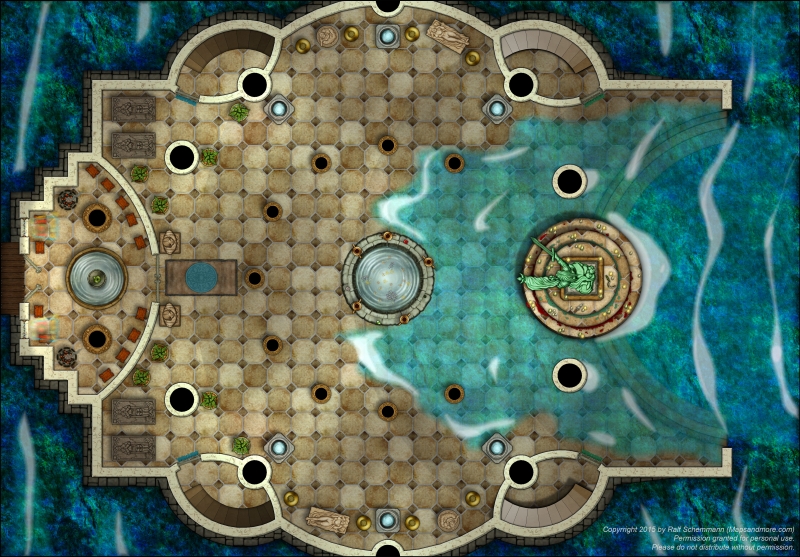 Something like this looks very fancy and perhaps even evocative. When you first look at it, you might even start imagining for a moment what the place would look like if you were a person stepping into it through a door. But as the encounter progresses, all of that color that hints at an environment starts to fade away, and the only thing you really keep seeing is the grid lines and the barriers that block ranged attacks and spells. Because those lines are what is relevant information if you play like that. The grind lines are the signals, while the colors that hint at a stunning and memorable environment are  only noise.

To take the most extreme case, who ever imagines the battlefield, hordes of peasant levies, mounted knights, and war elephants that are represented on a chess board? It doesn’t happen. They are simply a grid on a board and abstract tokens that can be moved within certain rules. And even when you have the action of a fantasy RPG being connected to a non-mechanical story, I see this mental process of abstraction happen all the time. In an RPG, encounters should be scenes. They should not be logic puzzles. Or as someone phrased it many years ago, “don’t look for solutions to obstacles on your character sheet”. That’s not what RPGs are supposed to be for. That’s not where their amazing unique potential lies.

Moving tokens around on a terrain map is something that goes back to wargaming before roleplaying games were ever a thing, so it’s not like there ever was a moment in which they were introduced. But wargames have a completely different intention to RPGs. Their whole point is to be an abstraction and a simulation, to play out  how battles might have turned out differently if certain tactical decisions had been made. Making things more objective was the goal for both military planners and armchair generals. Imagining yourself as an officer on a hill talking with messengers delivering reports and orders was never the goal. But that’s exactly what fantasy RPGs are about.  To imagine yourself stepping through great ancient gates, or descending down a damp stone staircase into the darkness. To see vague forms slithering in the shadows and staring into the face of a demon as it rises from a burning pit. Putting a toy demon on a square grid just doesn’t deliver that.

There are many situations where less is more. And less visual aids means a more vivid imagination. (If the GM is doing a decent job with descriptions, but that’s a different story.)

Another thing that keeps happening to me is that any time I work on a new world map, I always get fed up with whatever shiny map making program I have and keep going back to go grab a pencil and some graph paper. Not quite sure why, but the process of designing environments always goes so much better and faster by just using a pencil. I guess in some part, it might be because of the limitations of the tools. There is no choice of colors or different line strength. Putting down a line is really easy, as is adjusting one. And there is no temptation to make everything right and good looking the first time so you don’t need to redo it all later, because you know the result will be a smudgy mess and making a nice handout to show the players has to wait until all the placement decisions are locked in. I’m not even hyperbolic when I say designing maps is probably 10 times faster on paper than doing it on a computer.