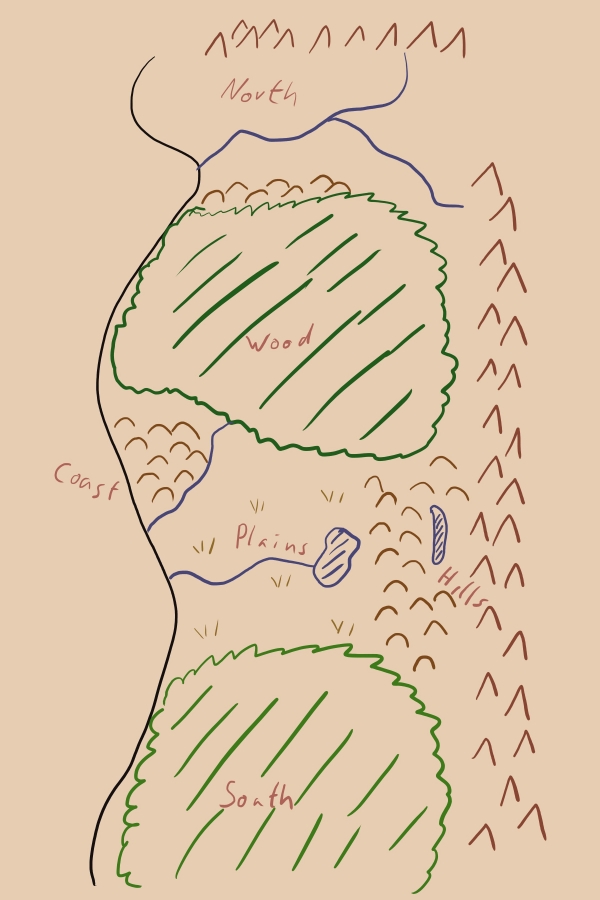 A simple map I’ve quickly thrown together because it’s just so much easier to talk about environments and the relationships between regions when you can just point to a picture.

As it turns out, the general layout idea in my head is pretty plain and basic. Which I guess is quite fitting for the central design paradigm I’ve set myself. A world that is designed to support classic dungeon crawl adventures and puts the needs of the gameplay over fanciful explorations of an entire and unique world. This is a layout that does the job. A subarctic valley in the very North, a large expanse of temperate-cool woodlands, a rocky coastal region, large river plains prairie, rugged foothills of a great mountain range, and subtropical woodlands in the very South. The whole area is about 1,200 miles long and 400 miles wide, which is climatically plausible, given that we don’t see what the land is like beyond the edges of the map and what possible wind patterns and ocean currents might exist. The total area is not that big, a bit smaller than all of Northern Europe, and about the size of my favorite reference frame for this kind of geographic layout, the American West Coast between the Pacific and the Rocky Mountains. Though the flat ground between the sea and the mountains is much wider, but I really don’t want to go into the geology of plate tectonics. For a dungeon crawl campaign setting, this is plausible enough.

As it happens, the overall map reminds me quite a bit of the map from The Witcher. Which is probably one of the best examples of really nice worldbuiling with a unique character that only uses the most basic generic components and doesn’t really bother to go into any detail about things outside the scope of the story. Really not the worst thing to have similarities with.

One thought on “The Six Lands of the Shattered Empire”