Thief: The Dark Project is one of the classic games from my teens, wich had gained an outstanding reputation back in the day, but for some reasons I’ve never really got very far past the first two levels. It’s a fantasy stealth game, and you could probably call it the stealth game that defined the genre for PC games. The same year, Metal Gear Solid was released for the Playstation, but even though they are completely different in almost any way, they both made the concept of games in which you secretly sneak around instead of killing all enemies popula. It was released way back in the great year 1998 (on the same day as Baldur’s Gate) for PC, and despite its age I was able to get it to run under Linux with WINE (with only an acceptable amount of trouble). I added some fan mods mostly for stability, but it also added some minor improvements like the night skies and water surfaces. I have to say it still looks pretty good for its age. Many games just a few years older have aged much worse when it comes to graphics. But this one is completely servicable. Audio is superb and I didn’t have any problems with controls or any glitches during play. My first impression had always been classic middle ages with a few anachronisms here and there, but as I got deeper into the story I discovered it to be actually following pretty closely to classic Sword & Sorcery traditions. It’s far more than breaking into castles and stealing gold coins and silver cups and candle holders. 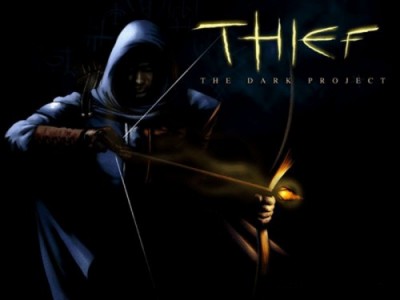 Thief is the story of Garrett, a master thief who in his youth was trained by the Keepers, a secret society of lorekeepers who also have knowledge of semi-magical stealth skills, which come extremely handy for Garrett during the game. Some halfway decent shadows are enough to make him practically invisible, even to people who are standing right next to him and looking straight at him. The other two important groups of the settings are the Hammerites and the Pagans, which is where the Sword & Sorcery elements really start to take center stage. The Hammerites are a religion of smite-happy fanatics who have tremendous power in the City, while the Pagans are a group of wild men and women who live deep in the woods outside the city walls and worship an ancient and dark god of fertility and chaos. During the course of the game, the Pagans become the main antagonists for Garrett. As he delves deeper into their hidden lairs and learns more of their ancient religion, the game is getting more and more surreal and fantastic. It reminded me a lot of some of the more bizare adventures of Fritz Leibers Fafhrd and the Gray Mouser. The intro should give you a pretty good impression.

END_OF_DOCUMENT_TOKEN_TO_BE_REPLACED

If your age is about 30, then there’s a very good chance your favorite classic videogame was releases in 1998. I first noticed this strange high occurance of famous gaming classics when I learned that Metal Gear Solid was release in the same years as two of my other favorite games: Baldur’s Gate and Half-Life. Also StarCraft. And FreeSpace. What, Thief too? And Commandos?!

Just look at this!

There might of course be some bias here. And given the huge amount of games that are released every year, this list of 18 famous titles may not be that impressive. But look at them! These aren’t just games that were simply “really quite good”, but a lot of them had a huge impact in the long run, that continues to this day. Nobody has to be told what Half-Life and StarCraft are. Baldur’s Gate is the granddaddy of Dragon Age and Mass Effect and made BioWare into the famous company it is today. Ocarina of Time is the first Zelda game as we know them today. Soulcalibur, Metal Gear Solid, and Thief are still getting new games. And while my memory might deceive me here, I think Rainbow Six pretty much invented the Modern Military Shoter with political backstory. Commandos and Anno 1602 may not be much remembered these days, but back then they made a really big splash and got lots of sequels and inspired many other games with similar mechanics.

I think this is much more than simply perception bias and nostalgia. 1998 was an amazing year for videogames, the like we probably havn’t seen again since.