I frequently see well meaning critics demand that more writers should include their own “cultural heritage” in their works. To get more diversity in fiction, particularly in fantasy, als also share new ideas and perspectives with the global audience. Does this also apply if you’re a writer from Northern Europe? We have lots of cultural heritage here. I am sure there’s lots of people who would really be into fantasy inspired by vikings.

But to be honest, we do have a bit more history than that here in “the land between the seas”. (No, not Denmark. Schleswig-Holstein.) And it’s all about sailing and the sea. Some time after the Viking Age, Lübeck became the gateway to Northern Europe and central hub of the whole Baltic Sea trade. While I mentioned once before the whole story of Margarete I, the Kalmar Union, the Battle of Visby, and pirates is excelent Game of Thrones level material, the history of the Hanseatic League is mostly a story of commerce and diplomacy, which lies somewhat outside of my own field of interest when it comes to fantasy. If someone would write it, I’d totally read it, but I’ve got other things to do with my own writing efforts.

But still, there’s the sea…

If you’d want to condense the culture of Schleswig-Holstein in just two images, it’d be dairy farming and the sea. Those are our things! (We don’t have anything else.) Including sea travel has always been a priority for me in my work on the Ancient Lands and it has remained so even after I gave the setting a tighter focus as a forest world. Forests and the sea, that’s the two worlds of the Ancient Lands. Today I was thinking about the role of sea spirits within the setting and I didn’t have a lot on my list. Mermaids that can shapeshift into humans and like to eat people with their shark teeth was about the full extend of ideas I had about it. That and Deep Ones, but those fishy friends are not actually spirits but more in the league of trolls and harpies. I had stopped worrying about sea monsters a good while ago, because when are you really going to have players fight those. I certainly don’t want to do fantasy kingdoms on the bottom of the sea, as throughout the past four decades those have always universally sucked. And when you’re on a ship, most sea creatures can’t actually fight with player characters. So what to do about the sea as an element of the Ancient lands?

Here’s where all the talk about cultural heritage comes into it. When you think about fantasy and the sea, you probably first think about pirates on tropical islands, and maybe Odysseus in the Aegean Sea as a distant second. But here up north, the image of the Sea is a very different one. The Baltic Sea is pretty tame (and boring), but the North Sea and particularly the North Atlantic Ocean are a different story altogether. There is very little romantic about how they are seen in local folklore and there aren’t any pretty mermaids in coral castles and friendly dolphins. The beach is a nice place to take walks and think about going for a swim if the weather were just a bit warmer. But the sea itself is a vast, black, cold void of watery death. 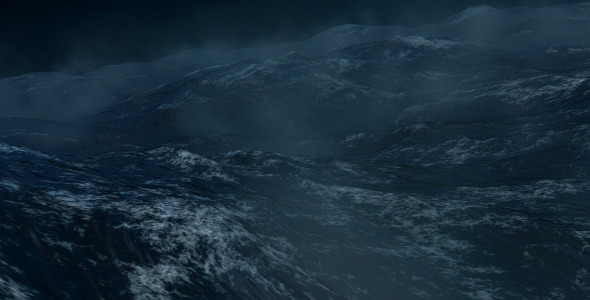 In Northern German folklore, the North Sea is given some degree of personalty, so you could think of it as a kind of spirit. But a more accurate word would be demon. Yes, the sea has always been a provider of food and the source of our wealth through trade, but that’s only as long as you stay above it. Below the surface there is only darkness and death. If the sea is worshipped, it’s not to ask for plenty or good fortune. It’s begging it to spare your life. The sea can swallow everything that floats on it or that is close to it, and what it devours is never heard from again. It is literally forever vanished from the face of the Earth. Only very rarely do things come up from below, and these are the massive corpses of things unlike any creatures seen on land or in the air. Things with no resemblance to what can be found in rivers and lakes. Below the waves lies a world that is not meant for people. A world in which people can not exist.

While I like the idea of shapeshifting cannibal fish ladies, I’ve come to the conclusion that they are actually much too human like for a place like this. Instead of making the sea part of the Spiritworld, I am going to assign it to the Underworld. It’s not the world of spirits that seem related to people, but the world of alien demons. I had not really decided on any details about the Ocean God yet, but going with Dagon would be a much more interesting choice than some happy dolphin god. Another interesting aspect of the sea in the Ancient Lands is that aside from the highest mountains, it’s the only part of the world that is open to the sky without any cover. For people used to life under trees, this would be a very alien environment.

Of course, there are still some major sailing peoples in the Ancient Lands and I am going to keep sea travel an important part of the setting, But sailors will be a much more odd group of folks. Even staying close to the coasts, they are always living on the edge to the Underworld, much more so than any other people. And their own culture should be influenced by this proximity to demonic influences. Discovering remote islands will also take on a somewhat different character. I have not thought of any specifics yet, but reaching such a place should have some traces of feeling like arriving in a different world after having passed through an alien and malevolent otherworld of the open sea.