Totally random thought of the day:

Could you run a D&D campaign set in fantasy wilderness inspired by the style and themes of Metal Gear Solid?

As absurd as it first seems, I think this might actually work really well. Snake is an extraordinary warrior and thief who ends up in remote desolate places where evil madmen with their quirky superhuman henchmen prepare their villain lairs for devastating attacks with mad superscience. Make the big bads sorcerers and the weird gadgets into magic artifacts and it all should work just as well in an Iron Age tech fantasy world.

I think the best thing about MGS that makes it such an amazing series are the characters, especially the villain’s henchmen.Every single one of them is completely fucked up in the head, but occasionally sympathetic and even reluctant to help the villain. I think that would make for excelent NPCs in an open ended adventure with a lot of potential for really unexpected turns. And what player wouldn’t love to deal with an antagonist like Ocelot? That’s a guy you just have to love to hate. And then there’s also the betrayal by friends who don’t want to see you harmed but have other greater loyalties. Not being able to tell friend from foe (even after they’ve shown their cards) and conflicting loyalties from NPCs who are carrying various personal burdens is just the stuff behind ideas like Against the Wicked City and Blue Rose.

Speaking of Blue Rose, the pdf of the new second edition has just been released. Didn’t get it yet but really looking forward to seeing what they did with it.

But back to Metal Gear Solid antagonists. Another great aspect of them is that every single one of them is a completely different type of opponent with unique abilities and powers. Not just unique within the respective game, but unique within the world of the series. In Dungeons & Dragons there’s always the common tendency to make opponents based on the rules for making PCs. They tend to have classes, levels, and spells that are all available to the players as well. And for a great number of NPCs that works perfectly well. But I am a fan of mythic fantasy and the otherworldly and in such a campaign there is no need to have the main NPCs be ordinary people who have trained their skills. Making a decent number of opponents completely unique entities with distinguishing powers might do a great deal to make the world seem more magical.

I just started my three weeks off from work and plan to really throw myself into working on the Forest of High Adventure sandbox. Thinking of the main dungeons as Metal Gear Solid lairs is already getting my imagination bubbling. 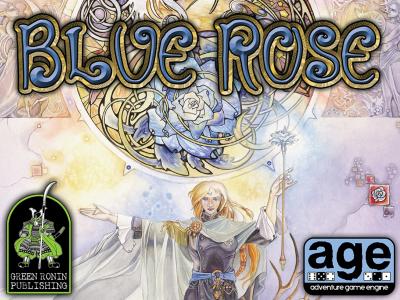 Earlier this week the Kickstarter campaign for the Blue Rose relaunch ended, well exceeding the $10,000 goal with total pledges of $85,850.

It will still be some time until the final book will be released. I believe to have seen estimates of somewhere mid 2016.

With quite some surprise I just saw that Green Ronin is planing a new version of their Blue Rose setting. There had been quite some talk about the original setting from ten years back on the RPG.net forum the last three weeks and some people brought up the idea of a new revised version. And apparently, people at Green Ronin had been pondering that idea themselves for a while, so now they are actually doing it.

Blue Rose is just old enough that I can say I remember the talk about it when it was originally released. (Or maybe it’s just me who’se getting old enough to say such things now.) While there was a good amount of praise and excitement for the game, a great deal of it was for the then new True 20 system, which was considered an interesting new take on the d20 system. The setting itself was something which lots of people just didn’t care for, and a good number of other people had some great interest in, but where rather disappointed with the actual realization. My own perception was that it was just another d20 game with an overly simplistic black and white setting that was disappointingly naive and didn’t really have much useful advice on how to run it. 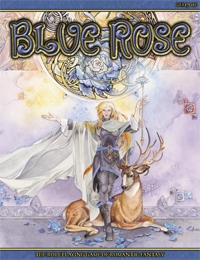 Blue Rose is described as a Romantic Fantasy setting, as in the artistic period of the early 19th century, but based on more contemporary works like the books of Mercedes Lackey and Ursula Le Guin. While that would appear to be the entire opposite end of the spectrum from my prefered genre of Sword & Sorcery, there is actually some considerable overlapp, in that the two both are fundamentally about high emotions and personal drama. From the descriptions of popular works, I wouldn’t want to read them, but as a Sword & Sorcery GM I have a very great interest in how the genre ticks and what elements I can use to spice up my own Sword & Sorcery campaigns. As much as I love the Sword & Sorcery genre, it’s mostly about preposterous actions and crazy stunts. Which I really love a lot, but I also have plenty of friends who I think might really like RPGs, but for who slaying hordes of monsters and throwing sorcerers off the top of their towers just isn’t doing anything.

Romantic fantasy is neither clean nor pretty, and can get quite ugly and brutal, but it exists in a different context. It’s not about enjoying the thrill of battle and the lust for riches, but a struggle to save the people you care for and to repair your own broken life. It may be a genre about knights in shining armor and fair maidens held in a castle by a dragon, but you might just as well see the knight being mortally wounded or tortured in some terribly dungeon with the maiden having to put on the armor and slay the dragon herself in grueling battle, suffering grevious injuries and and the loss of her friends and allies.

The original Blue Rose game wasn’t really that good at presenting the world in such a way and explaining how it works to GMs and players, and even with the changes of the True 20 system the d20 system was just too fiddly and tactical to really work. Particularly people who are not already great fans of RPGs tend to have a quite difficult time to get into d20 games, and it’s a lot more problematic when it comes to GMs who havn’t run and perhaps even played any games before. (I’d link to Angry DM here, but he’s currently reworking his website.) But I still really like the idea behind the setting and from what I know about the AGE system from the Dragon Age RPG it seems to be a much better fit. So I am quite exited to see how this will turn out. Might even throw in a bit of money if the Kickstarter has difficulties reaching its goal.