After spending a month with a really deep dive into The Savage Frontier and having recently started playing Skyrim again, I am currently having a lot of subarctic environments wandering in my mind. My first thoughts for a new setting had been to fall back on trying something in an Indo-Iranian Bronze Age style with perhaps some Mediterranean elements again, since I really don’t think anyone needs yet another Viking setting. But I had also set out to start something new and fresh instead of just stirring around the same pot of ideas that had gotten somewhat stale after ten years. And I did tinker around a bit with Baltic and Slavic setting elements in the past, though ultimately nothing really came from that. Instead of doing more Bronze Age stuff, which I still think is greatly underserved in fantasy, I think doing something more influenced by late Iron Age and Migration Period Northern and Eastern Europe could also be really cool. Also a pool of ideas for fantasy that barely anyone ever seems to go fishing in.

I already had the idea for the new setting that there was a fairly recent Ice Age that erased all the ruins of the Ancients from the surface, leaving the few remnants of their empires hidden away in underground caves. And I really love the common thing in lots of old Sword & Sorcery art to have human barbarians alongside long extinct animals from much more ancient aeons. The idea of having a late Pleistocene environment combined with broadly 4th century Baltic and Slavic people actually does sound pretty fun to me. I’ve been thinking for a long time that the typical European lineup of animals in Fantasyland is pretty boring. Wolves, bears, horses, cows, and wild pigs are just so everyday pedestrian for someone from central Europe. There is nothing really fantastical about it. But you don’t really have to go that far back and you have mammoths, ancient bisons, and sabre-toothed cats in the same places. Which are still perfectly realistic animals because they were real, but also much more foreign and exotic.

Growing up in Northern Germany, pretty much smack in the area where the massive glaciers of the last three ice ages reached their greatest extend, Ice Age stuff popped up quite a lot in my childhood. Often in school, but of course natural history and archeological museums around here usually had Ice Age exhibitions as well. I thought that stuff was pretty cool, but when you’re seven years old it’s not nearly as interesting as dinosaurs. Way more awesome than fluffy elephants. Back then at such a young age, I had no frame of reference for the time scales involved. But looking into these things now, I find it really fascinating that all the lands around here and to the north were nothing but bare rocks and sand under hundreds or even thousands of meters of ice only 12,000 years ago. And had been in that state for some 100,000 years. Everything that exists north of the German central hills and the mountains of Czechia is less than 12,000 years old. Even all the wilderness of Scandinavia that seems as ancient and untouched as anything can possibly be in Europe goes only back that far. All the plants and animals that exist there migrated to these lands only very recently from warmer lands to the south. And the Ice Age wasn’t a short temporary exception that disrupted the natural environment. The last three Ice Ages each lasted for about a 100,000 years each, with the periods between them only some 20,000 years in length. The fact that Northern Europe has an ecosystem right now is actually weird and not typical for this part of the world. I find this hugely fascinating and a great source of inspiration. 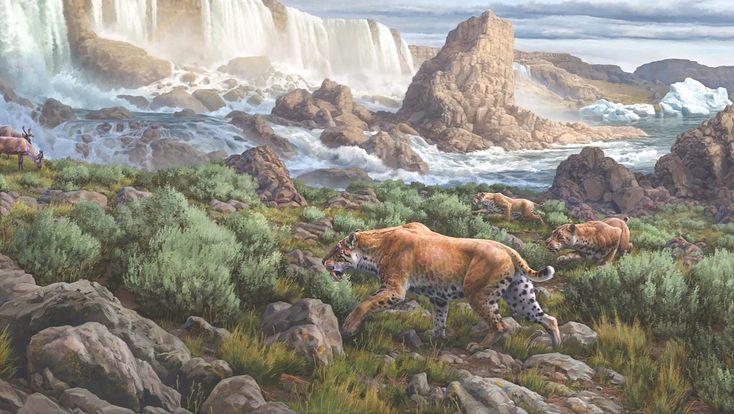 I am now considering stepping somewhat away from having the main civilization of the new setting consisting of warring city states ruled by immortal sorcerer-kings like Dark Sun or Morrowind, and instead putting the focus squarely on the wilderness beyond the border of civilization. The lands in the largely untamed wilderness where the clans that rejected the new structures of civilized kingdoms retreated to, and where people fleeing the reach of the current kings attempt to find refuge.

Studying The Savage Frontier in much greater detail than I ever did before has given me a lot of insights about how that region of the Forgotten Realms is structured and how its map can be a great inspiration for adventures that are not spelled out in the texts. But it also made me notice various aspects of where the design falls short and things could have been set up in much more interesting ways. So at this moment, I am very much considering to take the ideas I already came up with for a new setting and turn them into something that could be regarded as my own take on the overall concept of the Savage Frontier and Skyrim. But more alien and more weird like Hyperborea. And without Vikings.