Part 2 in my series about expanding on the original The Savage Frontier setting. 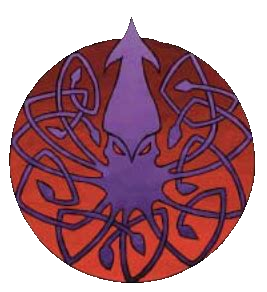 The Kranken Society is one of the main groups of villains described in The Savage Frontier, alongside the Hosttower of the Arcane, the Knights of the Shield, and the Zhentarim. However, their description and particularly their short-term goals and activities are kept very vague and unclear. We are only told that they are very secretive and trade in information, and that their real purpose is to collect and provide information about the surface to the Kraken of the Purple Rocks, which is plotting to establish an empire of its own in the depths of the Sea of Swords. While later editions spend much greater amounts of words on their descriptions of the Kraken Society, they never actually provided any more information on what its agents actually do that would get them into conflict with parties of adventurers. Gathering and selling information is not particularly villainous or a threat to the whole region. But as it turns out, as with so many things in The Savage Frontier, there is a lot of great potential for memorable villains once you comb through all the pieces of information and start connecting the dots.

The founder and leader of the Kraken Society is the ancient Kraken Slarkrethel, which discovered the ancient ruined city of Ascarle deep in the frozen waters of the Trackless Sea, off the shores of a small and remote group of islands known as the Purple Rocks. Later sources reveal that in the ruins, the Kraken discovered ancient magical secrets that inspired in it the dream of conquering for itself a great aquatic empire beneath the waves. Since nothing about that contradicts the statements in The Savage Frontier or reduced the possibilities for adventure, and gives us a bit more to work with, there is no reason to use that for this interpretation of the original setting. How the Kraken’s underwater conquests would bring it into conflict with the coastal port cities like Baldur’s Gate, Waterdeep, Neverwinter, and Luskan and the island of Ruathym is not exactly clear, but this is given as the reason for why it established a great network of spies and informants across the surface lands. Before it risks to expose itself by launching its conquests of the undersea races, it is biding its time learning as much about any potential rivals that might try to oppose it.

The first target of the Kraken were the small fishing villages on the Purple Rocks right outside its new lair in the ruins of Ascarle. Here are the headquarters of the Kraken Society, and its agents are effectively in control of the islands, their remoteness and isolation allowing them to keep their activities secret from the rest of the world. On the mainland, the main base of operation of the Kraken Society is in the small towns of Yartar and Triboar in the Surbrin Valley. For an organization created with the purpose of gathering information about the major naval powers on the coast, establishing their main foothold some 200 miles away from the sea and far from any major city seems a very odd choice. But the collection of information is only one of the tasks of the Kraken’s agents, and the specific location of Yartar actually opens up the door for much more sinister activities.

Yartar is located on the banks of the Surbrin river where it flows into the Dessarin that continues all the way south to Waterdeep. Through the Surbrin and further up the water through the Rauvin, boats and barges can travel to Nesme, Mithril Hall, Silverymoon, Everlund, and eventually Sundabar, from where the road leads to the city of the last dwarven king in the North, Citadel Adbar. From Yartar, an overland route extends east towards Everlund, and to the west a road leads to the great highway from Mirabar to Waterdeep. Yartar may not be a large town and located seemingly in the middle of nowhere, far from any centers of powers, but it is the main hub of all trade that is passing through the Savage Frontier. If for some reason the port cities were unable to transport supplies and soldiers on ships up and down the Sword Coast, because of a powerful enemy in the water attacking and sinking any ships that leave port, the highway from Mirabar to Waterdeep and the Dessarin would become the fallback route of transportation, far away from the sea and beyond the reach of the creatures of the deeps.

In the event of a war between the Kraken of the Purple Rocks and the port cities of the Sword Coast, the Dessarin valley would become the new lifeline for the surface dwellers. But the tentacles of the Kraken are numerous and reach far, and it already has its agents in place to cut Luskan and Waterdeep off from the interior of the North.

The agents of the Kraken Society are collecting information for their master about what is going on the surface. But they don’t simply keep everything they learn to themselves, they also trade in it. And while the common agents who know nothing about the true nature of either their society or its master use their knowledge to gain personal wealth and power – as much as there is to get in such a remote backwater – the leaders are trading information for more information. Specifically such information about who could possibly a threat to the conquests of the Kraken and who would be in position to interfere with or undermine any resistance, and of course any information that could be used to blackmail them into compliance once the day will come.

For the time being, the Kraken Society continues to lay low. Agents use information they come across to extort money and personal favors while keeping their hands of people who could potentially threaten their operations, such as the Harpers or the lords of the powerful cities. However, should someone start prying into their activities or take notice of the true extend of their operations, they will resort to assassination to deal with the situation quickly and quietly. And while the leaders of the society in Yartar are waiting for the day when their master commands them to strike at the cities of the Lords’ Alliance where it will hurt their ability to interfere with the Kraken’s conquests the most, they are actively engineering seemingly unrelated and minor conflicts to steer more victims into their debt and ensnare them in their tentacles.