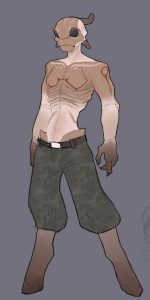 Goblins are one of the many peoples populating the lands of Kaendor but they are barely seen in the cities and towns of Senkand, making their homes well beyond the edges of civilization. A large number of goblin villages exists west of the mountains in the forests of Dainiva, particularly in the caves of the lower mountain slopes and foothills, but they can also be found further west in places where the dense forest blocks out most of the sun, all the way up to the great river cutting the vast woodlands into two halves. Other settlements are located beneath the rocky highlands of the Yao, and they are also said to live in the far northen lands of Venlat. 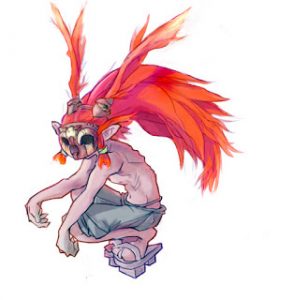 Goblins are humanoid creatures of short stature, usually standing around four foot tall but occasionally reaching up to five feet in height. They have tough hides ranging from a dusty brown to grey that helps them blending in with rocky environments as they oftn wear nothing more than loose trousers and perhaps a simple shirt in similar natural colors. While goblins have faces similar to other humanoid peoples with small noses and big black eyes, most people regard them as rather expressionless and blank. Goblins that could be considered chatty are rarely encountered, giving them a reputation for being somewhat dull, but they are no less smart than other peoples. Many Yao who have had dealings with goblins describe them as refreshingly composed and unobstrusive. 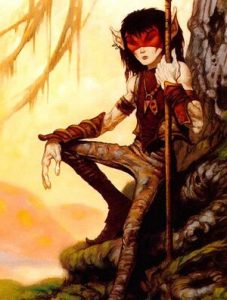 While goblins frequently come outside to the surface, they mostly do so during the evenings and at night and prefer to stick to densely forested areas as their true home is found underground. Not only are they well adapted to living in caves, they also follow ancient customs of adapting underground spaces to their own needs. As they don’t make any metal tools of their own, and bronze blades and chissels from the surface are limited, their masonry and sculpting looks very primitive to the stonework of asura and naga and even the cities of Senkand, but their constructions are often much more sophisticated than their rough looks seem to imply. 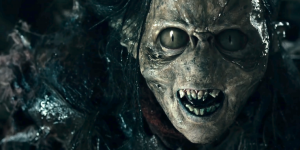 Being fully at home in caves, goblins are incredible rock climbers, and their small and thin statures allow them to move through very tight spaces with relative ease. Many caves in Kaendor, particularly below the great mountain ranges, go incredibly deep, with many of them reaching all the way down into the Underworld. While being an incredibly dangerous environment to most peoples other than goblins, the goblins themselves make frequent journeys into the greatest depths of the Earth and are familiar with many of the main passages. Explorers trying to reach caverns and ruins deep underground without goblin guides face little chance of success, or returning. In the woodlands of Dainiva, goblins are the only people truly native to the land. The more northern reaches of the forest close to the mountains have become home to a number of Fenhail villages, but these have only appeared in the recent centuries, after the First Sorcerers were already gone. The goblins of the forest have called Dainiva their home for much longer than that, even during the time of the Asura Lords. They still possess much ancient knowledge about parts of the woodlands that no Fenhail has ever set eyes on. While few goblin villages are exactly welcoming of visitors, few are openly hostile or ambush strangers found passing through their territory. They are most likely to stay out of sight amd wait for intruders to be on their way, but some are more open to talk, even if rarely enthusiastic. Many goblin villages are very interested in bronze blades and tool, though they rarely have much to trade other than food and leather. As one is moving deeper into the forests and away from the mountains, things are further complicated by very few goblins speaking any languages other than their own.

Goblin king and bodyguards: A 3HD king and 2d6 2HD bodyguards live in the goblin lair. The king gains a +1 bonus to damage.

Surprise: Goblins surprise characters on a 3 in 6 chance in caves and rocky surroundings.