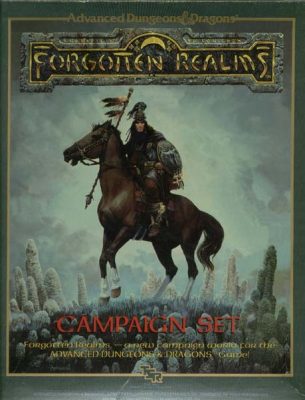 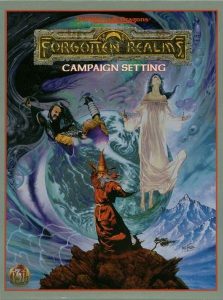 Flipping through the old 2nd edition Forgotten Realms book again, I was wondering who the artists were that made some of the illustrations in the books. While they are listed in the credits, there’s no attribution to specific images. I wasn’t able to find anything, and thinking about where you might possibly find someone who could know, I checked Discord, and to my surprise, discovered that there isn’t a single Forgotten Realms centered server. At least no public one. I would have thought that there’s at least one with a couple of thousand 5th edition players, but no such thing.

And now that I am thinking about it, I don’t recall ever seeing any forums or fan sites with a focus on the classic Forgotten Realms of AD&D. Which I find strange, because from what I remember, the setting was really huge in the 90s and the 2000s. The 5th edition “version” of the setting doesn’t even deserve the description of an empty shell. There’s only the Sword Coast and Chult, that’s it. And with the mind-boggling timeline advance of 4th edition, and then the quiet abandonment of the newly introduced replacement content, there really isn’t much left of a world in current products.

But that’s still more than the other AD&D campaign settings have been getting. Dark Sun had a short revival in 4th edition, but that’s it. What is surprising me is that there still seems to be a lot of fond love for Spelljammer, Dragonlance, and Dark Sun, and of course Greyhawk, but the original classic Forgotten Realms setting seems very much forgotten. Maybe it’s because the setting has never actually gone away, but still has its rotten corpse paraded around regularly? Perhaps it’s the fact that there hasn’t been any material for the other setting in some 25 years, that people who have some interest in them are thinking back to the stuff that was around in the 90s. You either die a hero, or you live long enough to see yourself become The Simpsons.

One thought on “Where is the Love?”