“Did you deem yourself strong, because you were able to twist the heads off civilized folk, poor weaklings with muscles like rotten string? Hell! Break the neck of a wild Cimmerian bull before you call yourself strong. I did that, before I was a full-grown man —like this!”
– Shadows in Zamboula

While thinking about a discussion about how you make adventures feel like Sword & Sorcery, it came to me that the Howard and Frazetta style in particularly is extremely physical and and greatly in love with the body and muscles. Fighting is not all about hacking and impaling, but often at its most intense and memorable when it comes down to a pure contest of Strength. I think that’s why large apes and giant snakes are so popular in Sword & Sorcery. They are the most spectacular incarnations of pure muscle. 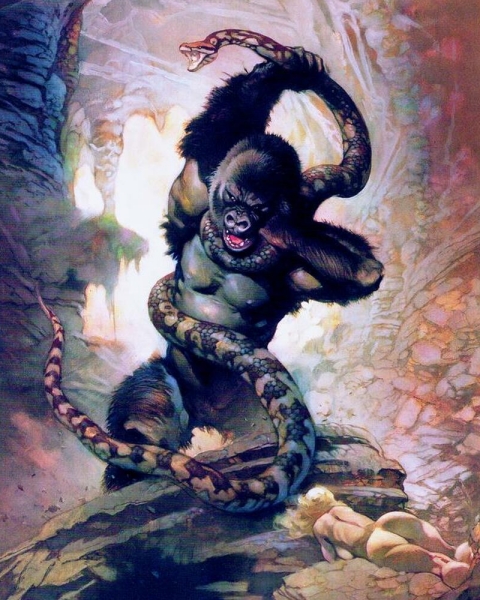 Sword & Sorcery often has strong elements of swashbuckling and bravado, and when you think of pure all-out badassery, things that should come to mind are wrestling with snakes or breaking the neck of a lion with bare hands. So when it comes to picking a system for your Sword & Sorcery campaign, one thing it’s really going to need is a solid mechanic for wrestling and unarmed combat.

My current darling among the many B/X variants is Worlds Without Number, and that game has my favorite system for wrestling in any iteration of D&D and its retroclones. 3rd edition was particularly infamous for having a grappling mechanic that nobody could ever remember, but when you look at say 5th edition or the Rules Cylcopedia, I still find it difficult to truly get a full grasp of it just by reading, and remembering any of it once I turned to the next page. The WWN system is both simple and easy to remember and also has a neat little tweak to make it actually look attractive.

To start a grapple, the attacker has to first make a successful attack roll, and then both attacker and defender make opposing Strength checks. This means starting a grapple is more difficult than making a normal attack and dealing damage, since you have to make two successful rolls instead of one. But if you succeed to get a hold of the defender, the results are pretty nice.

The defender can use a Main Action on his turn to make another opposed Strength check, and if he succeeds, he gets free and may use his Move Action to get a few steps away. Otherwise, the only thing that both attacking and defending characters in a grapple can do is making unarmed attacks. If the attacks hit, they deal unarmed damage to their opponent. But now here comes the really cool tweak that I’ve never seen in any other grappling system. If the round ends with the defender still being grappled, the attacker automatically deals unarmed damage to the defender without an attack roll. Assuming the chance to land an unarmed attack is 50% for both fighters, the attacker will deal 1.5 times unarmed damage per round on average. However, the defender will deal only 0.5 times unarmed damage per round if he tries unarmed attacks, or 0 damage if he tries to break free of the grapple. The attacker is clearly at a major advantage if succeeds on the risky initial attack that requires two successful rolls to do anything.

Alternatively, the attacker can also choose to end the grapple and attempt another opposed Strength check to drag the defender 10 feet, or throw him for 5 feet.

It may not be the best way to attempt fighting an ogre, but if you’re a big beefy barbarian with a few ranks in the Punch skill and the Unarmed Combatant focus, you probably can obliterate sorcerers very easily, unless you you’re dealing with another bronze god with muscles like steel. Even if making regular attacks with weapons might cause more damage, a grappled sorcerer can’t cast any spells or use magic items.

We’ll steal down through the top of the tower and strangle old Yara before he can cast any of his accursed spells on us.
– The Tower of the Elephant

An Expert starting with a Strength of 13 can learn the Developed Attribute and Unarmed Combatant foci, increase his Strength to 14, and gain a Punch skill of 2 by 3rd level, giving him an unarmed damage of 1d10+2. That’s an average of 7 damage, at a point where the average Expert has only 3d6 hit points, which is an average of 9. Unarmed combat has the potential to really fuck you up.