I like when people are putting stuff into their works that reflects what they value and believe in. That isn’t to say that I will enjoy a work whose values I find objectionable, but I rather have those things getting put out in the open for everyone to see than everyone trying to please everyone and being afraid of being embarased by audiences who think your believes are stupid. It took me decades to understand the meaning behind the claim that “irony is ruining oir culture”, but I now think it’s true. It’s not about using irony in harmless jokes. It’s about treating everything you say as a harmless joke. Mainstream movies are full of silly nonsense, and when someone points it out, even the creators are quick to claim “it’s just a silly movie, you’re not supposed to take it seriously”. And now we have reached the point where the perpetrators of failed coups build their defense on “obviously everyone would know that I wasn’t serious”. While everone wants to “support” the civil rights struggle of the day, nobody wants to commit to actually stand for anything, out of fear that someone might disagree and crack jokes at you.

Well, I’m just playing elfgames here, with people who already agree with me, so it’s not like I’m doing anything to fight the evils of our society. But that doesn’t mean the games have to be all banal and trimmed of any possible sharp edges. I like seeing stories in which the writers truely believe with sincerity that certain characters are good and what they do is just, without precautiously making sure nobody can tie them as a noose with it. And I like doing that myself. Now I am a big believer in universal equality, opponent of previlege, and basically a lifelong pacifist in the sense that I don’t object to all violence categorically, but set the bar for it’s justified use so high that it almost never is reached for most people in real life. And Sword & Sorcery is none of these things. But it’s still fun, and I think there is room to combine elements of Sword & Sorcery and my sincere convictions without invalidating either. 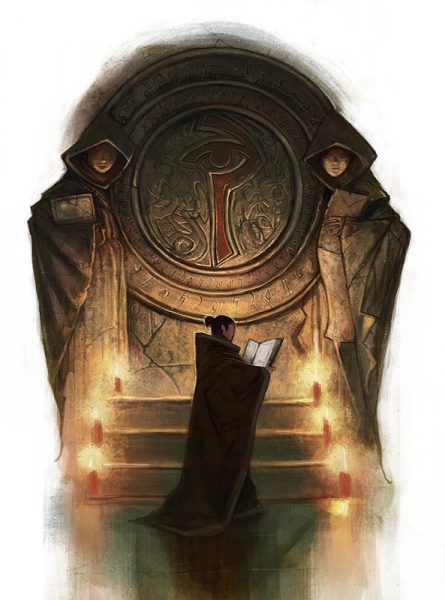 Fate is the endless weave of circumstances, coincidences, and accidents that determine the options and opprtunities that a person has in life. Some are caused by the decisions of other people, but most are down to random chance outside of any person’s direct control. It is the cards that everyone is getting played. It is not fair and it’s not fun, but that’s the way it is. The world is not obligated to conform to your wishes.

But the fate in which everyone finds themselves does not determine their unchangable destiny. All are still able to choose what they will do with the fate they have been given. Seers and spirits can read the fates of people and the paths that lie ahead of them. And the wisest of them know that even with the freedom choice, the choices of most people are very predictable. Oracles can fortell of great battles, but if both sides are of equal strength and cunning, no magic can forsee the victor.

Heroes in Kaendor are classical Heroes with a capital H. They are not simply people who have great courages, but people who fate has put into positions where they can accomplish great things that change the world around them for good. No birth or education, nor training or dedication will make a person a Hero. Heroes are not born, nor are they made. Heroes happen. Of course it helps to be the child of a great king or demigoddess, but that alone does not make a Hero. At the end, it all comes down to fate whether a person is in a position to become a Hero, and even then they still all have to grasp the opportunity and survive the trials they are facing.

Heroes are not mere ordinary mortals. Fate has given them a chance to rise above the common masses and become something extraordinary. And while no scholar or philosopher could ever put into words what exactly a Hero is, all people in Kaendor know them when they see them. Even when nobody in a place knows their names of faces, people will recognize them as Heroes. Though whether for good or ill is impossible to say. Unless heroes take care to conceal themselves from casual sight, people will recognize their extraordinary power immediately.

Many Heroes are natural leaders, or at least they are people who others want to follow. New settlements in newly claimed lands usually grew around a stronghold established by a leader. The status of Heroes often preceeds the status of birth, and many kings and queens select Heroes from among their families or even their most loyal retainers as their successors over their own descendants. Not all lords in Kaendor are heroes, but most are, as are all the high priests of the major temples, and even many guildmasters, bandit lords, and cult leaders.

In game terms, all characters who reach 4th level are Heroes. The vast majority of people in Kaendor are normal people or 1st level warriors, but training, courage, and dedication allows all who are physically and mentally capable to advance up to 3rd level. Elite personal guards of a great sorcerer king can consist ofna dozen 3rd level warriors, but people of 4th level and higher level are exceptionally rare and unique. They always have to be full NPCs with names and  backstories. In situations that demand faceless and interchangeable supporting extras, these are automatically limited to 3rd level at the most.

By virtue of being the protagonists of the campaign, all player characters have been given the potential to become heroes by fate. If they choose to see it through and survive the trials.

The three realms of Earth, Water, and Fire do not concern themselves with the morals of mortals. They simply are what they are, as are the spirits they bring forth. There is no judge to speak judgement over the living and the dead, and no afterlife to sort the souls for reward or punishment. As such, there is no Good or Evil. But the people of Kaendor still recognize that some things fill them with greatfulness and others with with horror and revulsion, and that some people are a constant source danger and fear for those around them.

Some people who are driven by their anger, filled with hatred, and revel in cruelty are considered to be red of heart. They are people who strike without need and seem to hunger for violence, which can even seem to be their only joy. While red-hearted people are recognized as being dangerous, not all necessarily see them as all bad people. Some never lash out with violence, while others have no control over their anger and grief deeply over the harm they cause.

But there are also those who are regarded as black of heart, and they are often feared much more. Those who are black hearted are not driven to cause harm by anger and blind rage. Many of them do not set out to do harm. They just really don’t care when they do. The wellbeing or suffering of others is simply no their concern. They are polite and peaceful when it suits them, but have little hesitation to resolve to violenc and cruelty when that seems more convenient. While people with red hearts are often considered to be haunted by demons, those who are black of heart are regarded as something much more sinister than that.

2 thoughts on “Philosophy of Heroes and Villains in Kaendor”