After I had my initial idea that Night City with its districts and gangs could be an interesting setting for an alternative Blades in the Dark game, I soon decided that I’d actually rather run something more along the lines of Apocalypse World. Blades’ system of fighting for turf really only makes sense if you want to play aspiring crime bosses, but doesn’t fit for parties who simply want to secure their neighborhood or megabuilding. Apocalypse World is in many ways based around the idea of the players establishing themselves as a powerful force in a post-apocalyptic wasteland, even though it doesn’t say so outright, which I think is a better approach for up and coming lowlifes in a cyberpunk city.

And after several days of fiddling around with Apocalypse World to replace the psychic powers with a hacking system, I discovered that someone else had already done something similar many years ago, and turned it into a full game and a proper book. 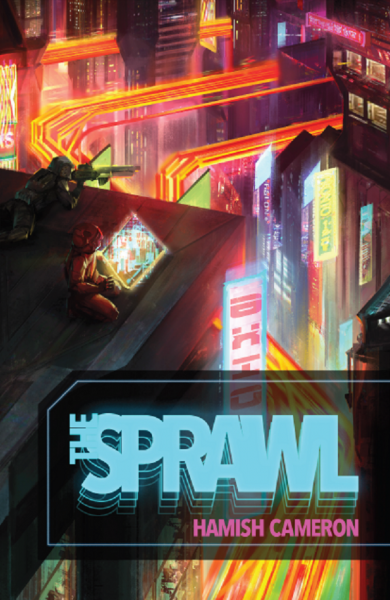 If you are familiar with Apocalypse World, then The Sprawl immediately shows that it’s a very close descendant. There are of course many different games that use the underlying dice mechanic and principles of Apocalypse World, but this game is much closer to the first game that started it all than for example Dungeon World or Blades in the Dark. The Sprawl is the first other game I’ve seen that retains most of the basic moves from Apocalypse World mostly as they are. The names have been changed to a style that (the author assumes) have a more cyberpunk feel, but you still have the Go Aggro and Seize by Force moves that make conflict scenes in Apocalypse World so unique. The playbooks for different character types are all completely different from those in Apocalypse World, and while I think the Hardholder and Chopper could have been really fun in a cyberpunk setting, the ten playbooks of The Sprawl really cover all the character archetypes you could ask for in a cyberpunk game very well.

The Sprawl seems to be particularly well suited for a game set in Night City and I’ve seen people even describe it as an unofficial PtbA version of Cyberpunk 2020. The names are different, but it does have playbooks to play a Ripperdock, Media, or even Rockerboy. I looked at the new Cyberpunk Red once and was immediately “yeah, no thanks”. Even though I find the setting quite compelling (as genetic cyberpunk as it is), I really am way past the point where I want to deal with a four page flowchart to get all my little +1s here and +2s there. Those things don’t help getting invested in the story and spontaneous going with the flow of a chaotic action scene. They do the opposite. PtbA rules really are the way to go for the kinds of games that I actually have an interest to run.

Unfortunately, The Sprawl suffers from the same problem that almost all PtbA games seem to have. The bad example set by Apocalypse World that has been slavishly copied by anyone else. The game attempts to make the rules filled with style by using elaborate slang everywhere it can when a normal, self-explaining word would have done the job. I don’t know why the mechanic for hoping that an ambulance reaches you before you die is called “Acquire Agricultural Property”. Apparently it’s a joke on “Buying the Farm”, but I am a German fluent in English. I don’t know what that expressions means either, or what it has to do with dying. How am I supposed to explain this rules to players who are just as clueless? It’s only the most annoying example, but the issue is persistent throughout the whole book. Which, when you are trying to explain a very unconventional game system that is completely different from mainstream games, is bad!

One thing that I’ve seen people criticize rightfully is that The Sprawl presents a system for doing jobs for hire and does it in a way that implies that all the game will ever be is “Mister Johnson of the Week”. Get a job, prepare for the job, do the job, get paid for the job. And repeat until everyone gets too bored to continue. That seems like a good system for a couple of casual one-shots, but not for an ongoing campaign. But the mechanics as written actually work for a much wider scope than this. Since the real currency in The Sprawl is not money but reputation, there’s nothing stopping the PCs from giving them “jobs” themselves, or doing something for others for free. And almost all roleplaying adventures in any genres consist of an initial investigation followed by an infiltration. Looking for a friend who’s been having trouble with a gang really is no different from being hired to look for someone else’s friend who’s been having trouble with a gang. The PCs still pull of the same heroic and leave behind the same chaos in their wake, so their street cred should be affected the same way too. Calling the first and last phases of the cycle “get the job” and “get paid” creates the false illusion that it’s really about the exchange of currency. Which it is not. I think that The Sprawl is actually much more versatile than it Mission Structure falsely implies. Because as I said, even in a sandbox campaign, you always have the same cycle of establishing what the PCs want to do, preparing for it, doing it, and then raking in the spoils. To run The Sprawl as an open-world sandbox, one does not really need to make any changes to the rules. All it takes is a more open approach of what fiction the mechanics can represent. It only happens rarely, but The Sprawl is one of the very few games that I read and want to run as they written, without immediately having a number of house rules in mind before I’ve reached the end.