Despite my expectations, I actually stumbled across a great idea for my Planet Kaendor reworking yesterday, shortly after writing the last post.

I’ve had a long on-again, off-again relationship with Sword & Sorcery campaigns. I’m absolutely a huge fan of Conan and Kane, but generally enjoy reading them in small portions. For long term campaigns, the typical bleakness and violence seems like a bit too much for me, and when you descend down into the abyss of Sword & Sorcery fandom, you get quickly swept up in the currents of hyper-violent grimdark orthodoxy. Which in my opinion is considerably more extreme and intellectually hollowed out than the tales of the great masters ever where. Yes, they always were violent, reveled in (implied) debauchery, and had elements of horror. But the popular perception today is like a copy of a copy of a copy that only captures the most extreme expressions of black and white and losing all nuances. 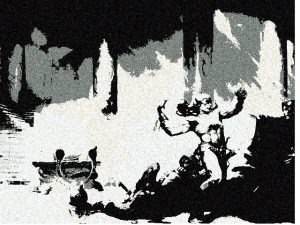 The piece of advice for S&S campaigns that I came across was a reminder that the stories are usually highly episodic and the heroes begin each new adventure in a completely different place, with all the gains from their last undertaking already lost and forgotten. Which was put in direct opposition to the infamous quote from Gary Gygax that “YOU CAN NOT HAVE A MEANINGFUL CAMPAIGN IF STRICT TIME RECORDS ARE NOT KEPT”. I never was a fan of Gygax and his ideas of adventures and gamemastering (*boo*, *hiss*, I know…), but this piece of advice I always found very compelling. And I did rigorously apply it during the Inixon campaign, though that turned out to not have made any difference because we never went through with managing long expeditions into the wilderness from a fortified base camp.

But now that I think about it, this is really an approach to managing time that works in direct opposite to the aesthetic goal of making the world feel unmoored in time, with no real sense of either the past or the future. The rest of the world is not keeping track of what happened before, then why would the hero. The inevitability of all their deeds being forgotten and leaving no lasting legacy is supposed to be part of the setting’s tone.

To take it a step further, you could not just stop using a calendar (even though I made such a cool one) but also forgo keeping detailed records what the players did entirely. Taking notes about what is currently going on in the current adventure is of course still a good practice, but once it is wrapped up and the campaign moves on to the next adventure, you can discard them and rely entirely on your own fallible memory. When the players ask who exactly an NPC was who they supposedly had been talking to some adventures earlier, just shrug your shoulder and tell them that their vague memories of those encounters are probably reasonably close enough to what really happened. Don’t try to help them remember. At this point it doesn’t matter anymore anyway and whatever they can agree on now becomes the new reality. Even if as the GM, you still remember what really happened.