Haren was selected to be the captain of their new ship and Kevan was able to find a crew of 8 trustworthy sailors in the taverns of Abil, as well as a Sui warlock who wanted to accompany them on the journey.

Nolin pointed out that a group of sailors had been hanging around near their ship since shortly after they arrived and so Haren, Finan, Ilmari, went over to them to see what it was about. The sailors seemed to be interested in their ship, but appeared to have some of their concerns eased at the explanation that they just recently took the ship from some pirates. The sailors still told them that the weather seemed very fine for setting sail and that such an opportunity should not be wasted. Once the men returned to their new ship, the sailors returned to their spots on the crates and send one of them to make a report.

Nolin wasn’t able to get any useful maps showing the precise location of Inixon. While the areas of Sulay closest to the mainland were pretty well charted, the locations of islands further out in the Endless Ocean was often nothing more than ruomor and guesswork. He guessed that the best shot at getting an accurate map would be in Tual, one of the few major ports among the countless of small islands.

With no more business in Abil, the ship set out the next morning to sail to Tual with the goals on getting some maps or other useful information about the specific location of Inixon.

Another ship was spotted in the distance, but it soon disappeared without getting closer.

5 days after leaving Abil and 11 days after leaving Orlane, the ship arrived in the notorious pirate haven of Tual. Instead of a real island, Tual turned out to be a group of rocky spires reaching out of the surrounding sea, covered in small wooden huts and connected by precarious walkways and bridges, with disturbingly large numbers of sharks in the waters below. 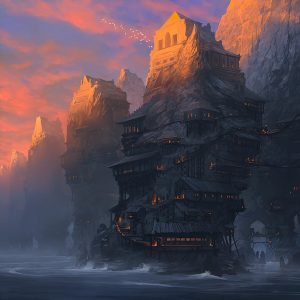 After docking their ship, the group started to walk around town to search for hints regarding someone who might be able to provide them with the means to reach the mysterious island Inixon. They ended up in the Beached Whale, a large tavern build inside the hulk of an overturned cargo ship that had been thrown on the rocks in a typhoon many years ago. The first name they got was of a navigator named Juib who claimed to have to the Island several times, but he had disappeared recently, with rumours having that he’s been having some trouble with the Pirate Queen of Tual.

There was also word on the street that a pirate captain named Kamar was planning to sail to Inixon in search of a treasure, and that he had been trying for quite some time to buy something from the merchant Perang, apparently unsuccessfully.

The next morning, Sagari took the group to the mansion of the Pirate Queen Farah on top of one of the rocky spires and use his connections with the Sui nobility of Sulay. The well armed and disciplined guards at the mansions gate let them through into a grand entrance hall, where an elderly servant was asking about their business. Sagari told them that they wanted to talk with Farah about Jiub, and unexpectedly the servant returned a minute later, ordering them to follow deeper into the mansion. Sagari and Alamar explained that they had business with Jiub and would like to negotiate for his release. While Farah wasn’t usually open to such requests, the arrival of strangers completely unknown in Tual happened to come at a very convenient time for her. She had a problem with Captain Kamar and wanted him gone from her port, but she couldn’t afford to risk her position of neutrality and respect among the other pirates in Sulay. But if Kamar ended up dead in one of the many common fights among pirates in Tual, nobody would be batting an eye. So the Pirate Queen proposed to them that if Kamar were to be permanently gone from Tual, she would release Jiub on the condition that they take him with them and he never returns to her port. A proposal that the group was willing to consider.

While still considering what to do about Kamar, the group decided to make a visit to the mansion of Perang, to see what business the two men were having with each other. Perang had a spire all for himself, with a small dock at the base and a cargo elevator going to the house at the top. But with the elevator up and nobody in sight, they had to take the stairs all the way to the top. When they arrived at the gate of the mansion, they found three lazy thugs sitting in the sun at a small table, who never bothered to get up from their seats as the newcomers approached them. Only when they told the guards that they wanted to talk with Perang about Inixon did the largest of the trio send one of the others to get inside. A few minutes later a well dressed Fenhail man came from the house to ask them if they had been send by Kamar, and he still didn’t get the message that his master doesn’t want to trade with him. Alamar tried to explain that they had nothing to do with Kamar but were interested in the same purchase, but the servant told them that his master was not interested to sell to anyone and told them to leave. The group tried to play it tough and pointed out that those three thugs wouldn’t be able to make them, but the servant responded that they clearly had no idea whose house they had come to. Not wanting to start a fight over the this, they returned back to their ship to discuss their further plans.

They decided to try and catch Kamar at the Beached Whale that evening, with Sagari trying to charm him and make him tell what he knows about the location of Inixon. If that failed, they could still try to have Finan and Ilmari shank him in a bar fight caused by Haren. When they made it to the Beached Whale, they found Kamar with some of his pirates sitting at a table, and Alamar put on a new face and walked over to them to ask to join them for a game. They were happy to offer him a seat and Sagari got in position at a nearby table. Unfortunately his attempt to charm the pirate captain failed and he gave the signal to the others to go ahead with the more direct approach.

Haren started a fight at the bar and while everyone was distracted, Alamar used his Staff of the Adder to bite Kamar under the table. Unfortunately he only nicked his leg and didn’t manage to poison him. Finan and Ilmari moved up to stab him from behind while he was still distracted and getting up from his seat. As the whole taverns was descending into a brawl, Haren knocked out a sailor next to him and made his way over to his friends at the pirates’ table. Even after several hits from Finan and Ilmari, Kamar was still coming at them until Haren came to their help. Seeing the fierce fighting, Sagari decided to stay out of the fray but charmed two nearby sailors to go help his friends. Meanwhile Alamar was using his eldritch magic to make one of the pirates to drop dead in sheer terror. When the captain fell under the combined assault from Haren, Finan, and Ilmari, the remaining two pirates turned to make a run for the door. Kamar’s large bodyguard fell soon after and Ilmari managed to knock out the last pirate before he could get away. As he was struggling to drag the body towards the door, Haren simply threw him over his shoulders and they made their escape while Sagari filled the entire tavern room with heavy fog to cover their retreat.

They took their prisoner to a nearby alley to wake him up, and as the pirate was still coming to Ilmari used the golden Mask of Charming, this time with success. The pirate was happy to tell them that Kamar had wanted to look for a treasure on Inixon and even had a map that supposedly could take them there, but they had been sitting in Tual for weeks while he was trying to get an object from the merchant Perang that would help them get passed the dangerous reefs around the island. After he helpfully told the group that there was currently only a handful of pirates on their ship, with most of them being in various taverns around the town, Haren quickly dispatched him from behind with his axe.

Seeing an immediate opportunity, the group went straight to Kamar’s ship before any word got there about his death. While the rest of them were keeping out of the way among some crates, Alamar took on the face of the sailor they had just questioned and ran towards the ship, shouting to the pirates that their captain was in trouble and needed help. Not noticing the unknown voice on the familiar face in the dim light of a few lanterns, the leader told four of them to stay and guard the ship, while the rest of them started running towards the Beached Whale, with Alamar following behind them for a while to keep up the deception. Once they were out of sight, Haren, Finan, and Ilmari raced up the plank to the deck and killed the four pirates without any trouble. Sagari went to search the captain’s cabin and found both sea charts with the location of Inixon, as well as a treasure map and a chest with the pirates’ loot. Grabbing the maps and the chest, they turned over some barrels with lamp oil in the cargo hold of the pirate ship and set it on fire.

They returned to their own ship with their haul, with none of the pirates that had seen their faces left alive.