One of the major parts of food production in Kaendor is the harvesting of honey from giant bees. Giant bees construct their hives in cave systems and abandoned burrows of large animals, but in some places have been successfully lured into artificially dug tunnels. Hives generally consist of a small number of brood caves where larvas are being raised, and several storage caves where honey is being kept.

Giant bees are highly protective of they honey and quickly attack any intruders they perceive as a threat. To safely harvest the honey, workers protected by armor take buckets of honey contaminated with a fungus that is deadly to giant bee larvas and pour it on the floor of a storage cave. Worker bees quickly detect and identify the fungus and use chemical markers that make the entire cave off limits and abandon all the honey stored in it. Within a day or so, the cave becomes safe to enter and the honey can be harvested, with the giant bees having no more interest in it.

While seemingly easy work, harvesting honey is a highly skilled occupation. Not only is preparing a storage cave for harvesting extremely dangerous, with death a constant threat, but the leader of a harvesting group also has the great responsibility to prevent the fungus from accidentally being spread to other caves, potentially killing off the entire hive in a matter of weeks. As such, giant bee keepers are often highly respected people in their towns, like millers, smiths, and shipwrights. 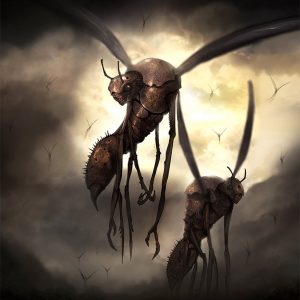 Sting: Melee Weapon Attack: +3 to hit, reach 5 ft., one creature. Hit: 3 (1d4 + 1) piercing damage, and the target must make a DC 10 Constitution saving throw, taking 7 (2d6) poison damage on a failed save, or half as much damage on a successful one. If the poison damage reduces the target to 0 hit points, the target is stable but poisoned for 1 hour, even after regaining hit points, and is paralyzed while poisoned in this way.