Now that’s a game I have not heard from in a long time. A long time…

This comes completely out of nowhere. Fantasy Flight Games, the current license holder for Star Wars pen and paper Roleplaying Games, is releasing a 30th Anniversary Edition of the one and only original Star Wars Roleplaying Game. 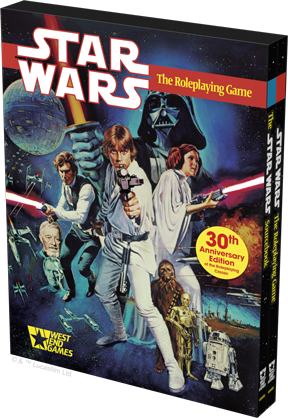 It looks to even be the first edition, which is widely regarded as the best edition of the West End Games game because of its simplicity, and even as the best Star Wars ever made. It’s described as a limited edition but priced at a reasonable $60. Which leaves the question how limited it will really be.

It’s a fantastic game, but I think in the current RPG market there is probably little risk of this becoming any kind of threat to FFG’s own Star Wars game. Small and tidy games don’t seem to be making it big these days and customers love their piles of splatbooks with lots of pictures and endless character customization. Which this game certainly doesn’t have.