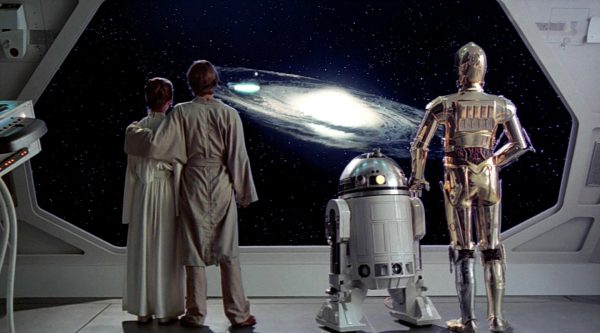 Recently I’ve been thinking about a sandbox campaign set in the Star Wars galaxy and whether these two things could actually work together in a way that gives them both justice. And I’ve come to believe that yes, it can be done. Though with some limitations, however.

Broadly speaking, there are three main categories of heroes in Star Wars. Rebels, Jedi, and Scoundrels. Of these, I think only scoundrels can actually work as a party for a sandbox campaign. Scoundrels are great because they are inherently proactive. Because they are always looking out first for Number One. They are interested in their own benefit, which more often than not means credits. Smugglers and bounty hunters always have a default goal they can pursue in absence of anything else pressing: Make more money! This puts them into immediate conflict with the law and generally involves messing with pretty violent people. A scoundrel campaign is pretty much writing itself, which is what you want in a sandbox.

Playing rebels is more of a problem, though. The goal of rebels is to take down the Empire through military actions and targeted sabotage. But just going around collecting stormtrooper helmets is not going to do that. There is effectively an endless supply of those. To make a real difference, their attacks have to be part of a bigger strategy and need to be coordinated with lots of other people. Which means that all the big decisions are being made by rebel leaders who have a more or less complete overview of the entire military situation. If the players are getting orders from higher up, it’s not really a sandbox, regardless of how much freedom they are given in the execution of their orders. If they play military leaders than you’re playing a wargame. Doing things you like doing and opening new adventures where you spot them does not work when playing rebels. And neither does it work when playing Imperial officers or troops.

Jedi are more flexible compared to military characters, but they are by their very nature completely reactive. Jedi wait in vigilance until the Sith rear their ugly heads somewhere in the galaxy and then go chasing after them until the status quo has been restored again. This doesn’t really work as a sandbox either. It’s always the Sith or oder Dark Jedi who have the full initiative and drive the plot forward. As long as there are no Sith stirring shit up, Jedi don’t have anything to do that would be proper Jedi adventures. As with rebels, you can give Jedi a great amount of freedom in how they go after their enemies, but they need to be given an enemy to chase after. They can not really start things on their own, which is a pretty big deal in a sandbox campaign.

The galaxy of Star Wars is big. Really big. There are thousands of inhabited planets that are each a full world in their own right. Trying to map all of this in the traditional way is, and in this case literally literally, impossible. But the way characters are interacting with space and distance in Star Wars is completely different from the way you find in Dungeons & Dragons for example.

For one thing, travel between any two places in Star Wars is effectively instantaneous. Various Star Wars RPGs have various charts for distances and spaceship speeds, but if you go by the movies, hyperspace is almost teleportation. In the scene where Luke first trains with his lightsaber on the Milennium Falcon, Han comes from the cockpit apparently just having put the ship on autopilot after making the jump from Tatooine. And the same scene ends with everyone going back to the cockpit because they arrived at Alderaan. And when Anakin is fighting Obi-Wan on lava world, the Emperor has a premonition that he needs saving and gets his shuttle ready. It’s not clear how long it takes the Emperor to fly all the way from the Core World to the Outer Rim and back, but they didn’t bother giving Anakin any medical attention before they are back at Corruscant. Doesn’t look like the whole thing took more than half an hour at most. In addition, aside from Interdictor Cruisers that know exactly where and when to ambush you, nothing can interrupt a hyperspace jump. There are no random encounters in interstellar space. Even if in your game travel between planets takes several days, it’s empty time in which nothing happens. Local planetary travel is also never really adressed. You can get from any one place on a planet to any other place just as fast as you can get to the other side of the galaxy.

A map for a Star Wars sandbox would look completely different than a map for a Dungeons & Dragons sandbox. When you can go to any place in the galaxy almost instantly, distances and relative positions become irrelevant. Instead of going to specific places, you really are going to visit specific people or buildings. On the whole planet of Dagobah, there is really only a single place. Yoda’s home. You could also consider the Dark Side cave as a second place but that’s really it. Corruscant is massive, but as long as you don’t have the specific adress of a specifc person, nothing on that whole planet is of any relevance to the players who have no reason to visit it. Instead of making a map for a Star Wars sandbox, you really need an adress book. People and specific places like cantinas, stores, hideouts, and bases are what makes up your sandbox.

However, places are almost always defined by either something that is hidden inside them, but most often by the people who are staying there. There are very few places in Star Wars that are interesting by themselves in the way that great dungeons are in D&D. The stories in Star Wars are always stories of people, not of places. When you prepare a Star Wars sandbox, preparation shouldn’t start by drawing a couple of dungeons that the players can exmplore. The real heart of the sandbox are the NPCs. The villains and the allies. Of course Star Wars has lots of absolutely fantastic and stunning locations, but their purpose is always as a dramatic background for interactions with other characters.

NPCs really are everything in any Star Wars campaign. They are what will make or break the game. And when you make NPCs for Star Wars, always go full out. Hold nothing back. Make them as outragously awesome as you can possibly get. In particular the villains. The villains are what your players come for when playing a Star Wars game and they want, and only deserve, the most awesome ones. Darth Vader and Boba Fett leave pretty big boots to fill, but you should aim that high. If the NPCs are not really that interesting, then it just won’t reach the awesomeness that is Star Wars.