I wrote about sandboxes and taking the idea of default goals from megadungeons on monday, and how it finally made sandbox campaigns click for me.

And it finally made me understand how I would properly run a Dark Sun campaign. A sandbox is a perfect match for it. One issue with the setting as described is that all the interesting possible oponents are fabulously powerful. If you want to engage in the current public affairs of Athas, you’re facing immortal sorcerer kings with limitless resources and whole armies of seriously dangerous minions. Yet doing regular bandit killing and caravan guarding would be just way too bland for a setting like this. Even being an ordinary adventurer looking for gold in dungeons would be kinda meh. 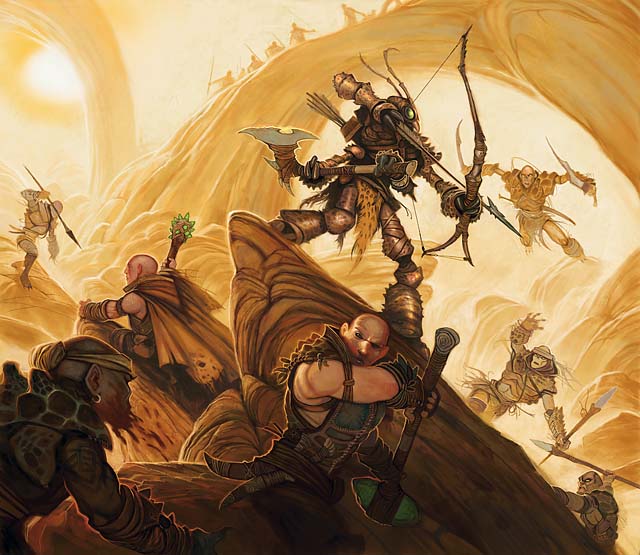 But as a sandbox it all makes so much more sense. The default action in a Dark Sun campaign is “don’t die”. When you’re in a city, then the templars of the sorcerer-kings are everywhere and looking to kill or enslave you for the slightest reason. If you’re not in a city, then it’s a constant fight to not be killed by the desert. Sitting around idle is never an option, you are always facing a threat. If you don’t have any specific goal for now, then simply staying alive and free will always keep you occupied. It’s a world that really comes to life through random encounters. Random encounters are not the hand GM nuding the players to do certain things. They are the setting itself being hostile to the players, which really is one of the big selling points of Dark Sun as a setting.

And going on more specific adventures with a defined goal can always be treated as a means to accomplishing the default goal of staying alive. Helping others is not something you do out of kindness, but because they will give you resources and assistance in return, which then can help you to survive the deserts and stay ahead of the templars for a little longer. And in the long term, the players can make allies and gain the friendship of slave tribes or bands of elves, or can call in a debt from thri-kreen. Or even somehow get the gratitude of a clan of halflings. Lunatic canibal halflings who live in the one forest in a desert world that everybody else stays way clear of. As they grow in personal power and gain allies, players can eventually get into a position where they can mean actual trouble for any of the sorcerer-kings. Whichever one of them the players decide to hate the most.

The Tyr Region is perfect for a sandbox, and not just because it’s full of sand. However, given that the setting was created for AD&D 2nd edition and that the really cool concept was quickly turned into garbage by a heavy handed metaplot that had NPCs do all the things that would have been cool for players to do, I very much doubt that this was the intention. But that’s clearly how I would run it.