Now this is not going to be a big, or even any, revelation to many people who are reading sites like this, but over the last weeks I’ve been doing more research on great adventure location design, which led me many times into dead ends because of the same single preconception the people writing have about D&D as a roleplaying game. So here you have it from my mouth: 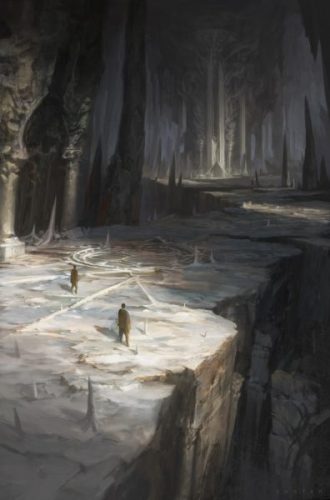 Early D&D* was an exploration game, not a combat game.

I think this is probably the single most important aspect that distinguishes oldschool roleplaying from “modern games”. With AD&D 2nd Edition it’s a bit muddy, but we can safely say that 3rd to 5th Edition and Pathfinder are all combat games first that have some additional rules for non-combat situation tacked on to them. But with oldschool games, the situation is really very different. Combat is something that can happen, but the whole game is build in a way that you really don’t want it to happen. Except if it is for dramatic reasons, of course. Stopping a major villain and slaying a terrible monster is great. But the rules as a whole are all set up to make combat a bad thing for the characters.

Combat provides very little XP, except when it opens the way to treasure that gives the party a lot of XP. Getting access to the treasure without combat is always preferable. Combat is the primary pressure put on players to not spend too much time in dungeons rooms and not simply dealing with obstacles by destroying them. Because both these things attact potential combat. Encumbrance exist to slow characters down, which means they take longer to explore the dungeon and are less capable of escaping from a fight. Encumbrance only is a bad thing if players don’t want to fight.

Combat also is deadly and gets characters killed, even if the party wins a fight. But combat also isn’t necessary. Any time the party encounters living things in a dungeon and there is no good reason why those creatures and NPCs are hostile, the rules have a reaction roll to determine how they react to the party. And the creatures attacking on sight is the least likely reaction. The next most unfriendly reaction in the Basic Set is “Hostile, possible attack”, which I regard as being most sensibly interpreted as “attacks if provoked by the party’s actions”. There is a chance that a monster actually reacts friendly and the next most positive result is that the monster leaves or considers offers. Because the monster does not want to risk a fight with likely dadly consequences either. And if a fight breaks out, there is also the Morale check, which is used to determine whether monsters who are taking casualties decide that they would rather abandon the fight than risk now even more possible looking death.

The whole game is set up so that combat hold almost all risk and no reward for the players and that even their oppponents prefer not to fight. Combat is what happens when an encounter ends in catastrophy.

D&D being a game of exploration instead of combat also explains the majority of traditional spells that keep getting carried on by each new addition even though they seem to be pretty much useless. They are useless in a combat game. But hold portal, levitate, and speak with animal all make so much sense in an exploration game.

One thought on “The greatest thing that D&D forgot”