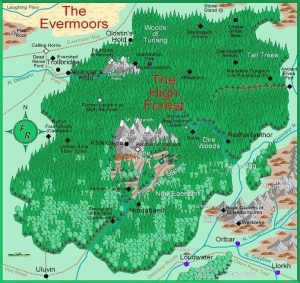 The Forgotten Realms were my first campaign setting back when I first got into RPGs and while I eventually got put off by its kitchen sink approach I still have some fondness for The North. The North is maybe 5% of the area of Faerûn but can stand as a complete setting on its own. The Sword Coast has become the default region for Forgotten Realms material and I believe the de facto officially supported region in 5th Edition for good reasons. While I don’t have a strong yearning to revisit this setting, I am still very fond of the High Forest in particular. I really got into RPGs when I played on a Neverwinter Nights server set on the eastern edge of the High Forest and eventually became one of the GMs and senior level designers. And my first steps into worldbuilding began with an attempt to take the hinted at past of this region and expand it into a proper playable setting. Eventually I dropped the connection to the Forgotten Realms entirely and now over a decade later it led to the Ancient Lands in its current state. But I always was a bit disappointed that I never got to run a campaign that goes really deep inside the forest and has the players explore its ancient mysteries.

I had planned to start a new Ancient Lands campaign next winter, but by now “next winter” has become “this winter” and its going to be delayed until next spring. And with still a good amount of time ahead, I still have not entirely commited to what I am going to run. Earlier this week I read a great recent post by the Angry GM about making wilderness travel more fun. And though I had last planned to do something simple and episodic, it put the sandbox bug back into my ear. I had written about a workable travel system for pointcrawling in the wilderness a while back which is quite similar, but as usual Angry made a great improvement over it by making it work without prepared precise maps. A pointmap was to be a compromise over a hexmap, but being able to track travel times and random encounters without a highly detailed map is even better. And unlike with a pointmap it’s really easy to handle a party getting lost.

In previous attempts to make a sandbox I found it very efficient to simply grab a bunch of old modules that fit the theme and put them all together on a map. One that came to mind was Hellgate Keep, which is set on the edge of the High Forest. And that got me the idea to use the whole High Forest chapter from The Savage Frontier as the base for my sandbox. It’s the original inspiration for my Ancient Lands setting and as such pretty much everything from it fits perfectly into it. While the North in later publications is a nice place, I think the original version from The Savage Frontier is by far the coolest. It’s classic 80s Jaquays goodness that still has a nice lingering Judges Guild smell. I am not exactly sure why, but the next time the region was described all the best places where destroyed and the most interesting characters dead. And a lot of it is great sandbox material:

There are also some other places in the Savage Frontier that can easily be transported into the High Forest and fit very well into it.

That’s a lot of great sandbox material, but to make my work easier I also want to add some classic modules that make for great additions.

Additional ideas include making Gauntlgrym inhabited by derro who are descendants of the original inhabitants and making the local orc tribes enemies of Hellgate Keep who want to take revenge for their people being taken to create the demonic tanarruk. Good factions are the key to a great sandbox and there are already a good dozen of them with none of them necessarily attacking the party on sight but all of them having lots of enemies and potential allies.

So much material and I’ve not really lifted a finger yet. This is about four hours of thinking what existing material I can use to make my own sandbox. I am still going to make this an Ancient Lands campaign, but I think most changes will be primarily cosmetic. There are different gods and races aren’t exactly the same, but overall I think it will be still very recognizably the High Forest.