And it actually doesn’t look bad at all. I played 3rd edition and Pathfinder for 12 years or so until I started looking at other fantasy RPGs and quickly got fed up with the excessive complexity, option creep, and power curve of d20 games. I’ve been toying and playing around with various AD&D and B/X clones since then and quickly lost interest in 5th edition after about the second playtest version. I’ve not even been looking at it with my butt since then. 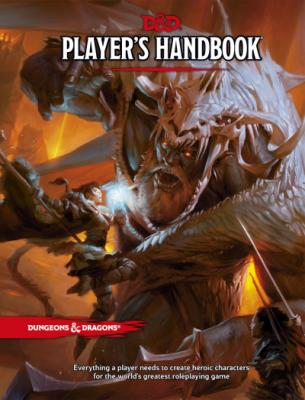 But recently I notices that several people writing about RPGs, who describe a play style very similar to my own, seem to be running 5th Edition as their system of choice and I got a bit curious when seeing forum threads about how people are feeling about the game after two years of playing. And the things that were praised by people who like it sounded quite intriguing, so I finally gave the finished game a first actual look.

My first impression was that the character classes once again have way too many class features, but when I actually read through the descriptions it turned out to actually be not nearly as bad as in Pathfinder for example. Most classes get something at each level, but mostly it seems to be pretty minor things that don’t look like they’d introduce a lot of option creep. There are some things about the races that I used to find aesthetically unpleasing, like giving characters lots of ability scrore bonuses with no penalties to counter them, but since then I’ve moved away from the idea of 1st level characters being perfectly average people. Now I think even first level characters should already be heroic individuals in a completely different league than the common rabble.

A similar thing is going on with hit points. 5th Edition characters get a lot of hit points. Hit points per level have been bumped up again, but more importantly the ability to heal damage during short rests by rolling your amount of hit dice pretty much doubles the amount of damage characters can take every day. And if I got this right, all damage is healed during a long rest. Perhaps, calling it damage isn’t really that accurate anymore. Getting hit certainly doesn’t represent a significant injury if the points can return completely within an hour without any magic.

What quite impressed me is the combat rules and skill system. Having played 3rd Edition for over a decade almost certainly helped a lot, but I think I got a pretty good grasp on the complete 5th Edition combat, exploration, and interaction rules within just half an hour of reading.

I am still not a fan of the spell slot system, but it’s much less annoying than it used to, with spells not disappearing after they are cast. Have not looked at all the classes yet, but they all seem to work much more like the sorcerer from 3rd Edition. And the DMG also has an option to convert them all to spell points, which looks quite decent. There also is only a single cure wounds spell whose power depends on what spell slot you use for it, similar to how most psionic powers worked in the Expanded Psionic Handbook. This is something I really like as it reduces the amount of pretty much duplicate spells and makes magic more flexible.

Also very nice are the new monster stat blocks. The main stats are almost as short as in the old TSR editions but also have all special attacks and abilities written right below them in a way that makes them very easy to look up in the middle of fights. 3.5e and Pathfinder already put all special abilities into the stat blocks, but with the game being so complex you often had huge paragraphs that can take some considerable time to read and fully grasp. 5th Edition monster stats are much neater and tidier.

The main oddity that I noticed is the distribution of monsters in the Monster Manual. So far the only Monster Manual. Not sure if the Challenge Rating system is any better or worse than it was in 3rd Edition, but a very large portion of monsters seem to have been rated down by 2 points and now the vast majority of monsters is of CR 4 or lower. There’s a few CR 5 and 6, but beyond that point there’s really pretty much only dragons, demons, giant, and golems. Which is not necessarily bad. One big annoyance of 3rd Edition is that many cool monsters are so powerful that it takes a very long time until the party is strong enough to be able to fight them, and in pretty much all the games I ran and played, the group never reached a level where fighting giants, beholders, or larger dragons could be considered. Reducing the spread is certainly welcome. However, at the same time it raises the question why it would be worthwhile to have a 20 level game at all? I would have to see the game in action for a long time, but the first very basic impression I get is that there’s not really a whole lot new to come after passing 10th level. Though this isn’t exactly new or unique to 5th Edition. The very first Dungeon & Dragons game was conceptualized as basically a 10 level game, with characters who passed 9th level no longer really improving much in power and being expected to settle down as rulers and generals. The story how 6th level and higher spells ended up in the game is somewhat murky, but I’ve seen claims that they weren’t really part of the original concept and only thrown in without much thought.

All in all, I am quite intrigued by this game and I’m seriously considering to use it for my next campaign instead of going with Lamentations of the Flame Princess. Though maybe I’ll feel different about it in a week or two. But still, I have to say that 5th Edition looks much more interesting and better than I assumed. It’s indeed pretty lightweight compared to 3rd Edition but also avoids the high fragility of low level characters in OSR games.