My post from earlier this week about using Lamentations of the Flame Princess for a Sword & Sorcery campaign received some interest, so why not expanding it into a series? Probably the biggest change I’ve made to the rules is a complete overhaul of the magic-user class. I am not a fan of the spell slot and preparation system of D&D. Of the three big flaws I see in the game, it’s the one I don’t like the most. (Negative AC is easily fixed and Alignment can simply be ignorred.) Spell slots just don’t mesh with any kind of fantasy fiction except for the Dying Earth novels. It just doesn’t feel right to me. 3rd Editions sorcerer class was a decent first attempt to adress this, but oddly enough the best magic system I’ve ever seen in D&D is the revised 3rd edition psionics system. The edition with the biggest design flaws and the previously most clunky sub-system. The Witch class is the magic-user class from LotFP converted to spell points and with a revised spell list. In my Ancient Lands campaign it’s the only spellcasting class that covers both witches and shamans, as well as sorcerers who have access to a few unique spells. 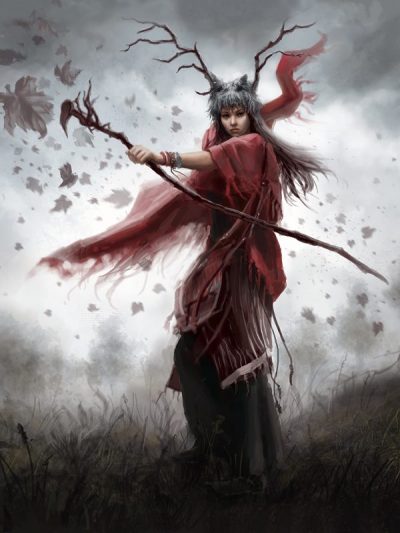 Everything else is just as the magic-user class. This table assumes that 5th level is the highest level of spells that characters can possibly learn or cast. For campaigns in which higher level spells are available it can easily be expanded. This spell point conversion uses the exact same spells as usual without any modification to them. The only thing that changes is the way in which spells are learned and limited to uses per day.

Spells are not prepared. A witch can cast any spell that has been learned at any time, but has to spend spell points when doing so. How many spell points a witch has is indicated by the colum “Spell Points”. The character’s Intelligence modifier is added to this number at first level (but not at each additional level the character gains later.) The number of spell points that are used is equal to the character level at which the spell becomes available.

Witches are highly flexible in chosing their spells and could either cast a smaller number of higher level spells or a large number of lower level spells. Learning a wide variety of lower level spells can be advantageous over always learning spells of the highest possible level as they consume a much lower number of spell points. In return for this increased flexibility in casting spells, witches don’t have the ability to switch out the spells they know between adventures. Witches can only learn new spells when gaining a new level and these spells can not be changed later.

The only way to get access to additional spells is through relics.

Relics are magic items that allow a witch to gain access to additional spells beyond those the character has learned. Relics are body parts of supernatural creatures or legendary witches and sorcerers who retain some of their former owners magical power. Each relic contains usually one spell and a witch holding or wearing the item can cast this spell just as if it were one of the spells the witch has learned. The witch has to spend spell points to cast the spell, just as with all regular spells, but gains a bonus of +1 to +3 to the spellcaster level to determine its effects, depending on the relic. Even if the witch already knowns the spell granted by the relic, the increased spellcaster level still applies.

This spell list is for my own Ancient Lands setting, reflecting what I consider appropriate spells for witches and shamans. Changing or expanding this list is trivially easy as spell work just as they always do out of the book.

This spell allows the caster to charm one or more animals, in much the same fashion as charm person, at a rate of 1 hit die per caster level. The caster may decide which individual animals out of a mixed group are to be affected first; excess hit dice of effect are ignored. No saving throw is allowed, either for normal or giant-sized animals, but creatures of more fantastic nature (as determined by the GM) are allowed a save vs. Spells to resist. When the duration expires, the animals will resume normal activity immediately.
This spell does not grant the caster any special means of communication with the affected animals; if combined with speak with animals, this spell becomes significantly more useful.

This spell allows the caster to causes a normal fire to break out in an area of up to 10’x10′ in size. While it lasts only a single round, the fire produced by the spell will cause 1d6 hit points of damage on creatures within its area; and it will ignite combustible materials such as cloth, oil, paper, parchment, wood and the like so as to cause continued burning. Alternatively it will extinguish any normal fire (coals, oil, tallow, wax, wood, etc.) within the area of effect.

The subject can see in total darkness (though not within areas of magical darkness) with a range of 60′ for the duration of the spell.

This spell may affect all spirits and undead undead creatures within range. Spirits will be banished to the Spiritworld unless each victim makes a saving throw vs. spells. If cast at only one creature, that creature takes a -2 penalty to the saving throw. Undead and spirits that successfully roll their saving throws must flee the area, and will stay away as long as the caster concentrates; the caster cannot move while concentrating. This spell will also remove the effect of a cursed item from any one creature, or may be used to remove the influence of any magical charm.

The witch casts this spell upon a particular spot, whereupon all plants in a 20 ft radius of the enchanted location immediately begin to writhe violently about, whipping around and entangling any creature in the area. Creatures threatened in this manner are entitled to a saving throw. If the saving throw succeeds, the creature’s movement rate is slowed to half normal; if the saving throw fails, the creature is so securely held in the plants that it cannot move, attack, or cast spells for the duration of the spell.

This spell causes utter panic in the creatures exposed to the cone-shaped emanation of phantasmal terror the caster hurls forth. If any creature, of any level or Hit Dice, fails a saving throw against Spell, it will bolt away from the caster. There is a base 60% chance for a creature to drop whatever it is holding (immediately upon failing the saving throw), reduced by 5% per HD or level of the panicked creature.

This spell causes a misty vapor to arise from the ground around the caster, forming a huge cloud. The cloud has a radius of 5′ per level of the caster. It has no ill effects except to block vision. While within the cloud, creatures are effectively blind.