The Bestiary for Fantasy Age has been released in pdf now, and it really was about time. When the game came out last year it was the most demanded addition to the rulebook, which only provided ten or so sample creatures to show what their stat blocks look like. Which is really not much as a basis to easily get an introduction in how to effectively make new monsters for your campaign. Now a dedicated monster book has finally arrived. 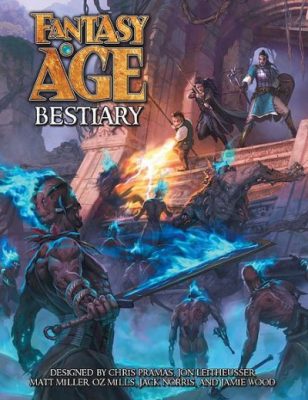 The big downside that immediately stands out is that there are only about 60 creatures in the book and the majority of them are pretty generic stuff that you find in every D&D Monster Manual 1. On the other hand, every creature has a full double page of description, which is more than I’ve ever seen in any other monster book. The description consists of a basic summary of the creature, usually a few paragraphs on making special customized versions of them, and three plot hooks as ideas how the creature can be used in play. This is something that I very much approve of. Unfortunately most of the creatures are not really interesting at all and so it all ends up being pretty uninspiring.

In Fantasy Age all the special abilities of a creature are in its stat block and usually it’s not too many of them to get too confusing. Often just four or five, with the creature’s natural armor and the ability to see in the dark being one item each. Most abilities are stunts which the creature can activate when it rolls two same numbers on its attack roll of 3d6 (if I recall correctly). Which in many cases makes a lot more sense than having them be special actions that are done instead of an attack and is one of the big features of the rules system. The downside is that the creatures have almost entirely only abilities for combat. That’s a bit too much needlessly imitating D&D in my opinion.

All in all, the Fantasy Age Bestiary seems like a book that is both necessary and unsatisfying. And like the rulebook itself it seems to be overpriced. There are so much better and bigger monster books out there which are much cheaper or even free and 15€ seems to be really too much. If you’re a huge fan of Fantasy Age and desperately waiting for a monster book to help running your campaign then this book seems like a necessary purchase. But if you’re looking for new monsters and inspirations for any other kind of campaign I very much recommend against it.

2 thoughts on “A first look at the Fantasy Age Bestiary”