Qelong is a small sandbox setting written by Kenneth Hite for Lamentations of the Flame Princess. Since it’s a short little book, this will also be a somewhat short review. Qelong consists of a river valley on the coast of a fantasy country loosely inspired by Cambodia. Two immortal beings have been fighting over the country for a very long time, and some 20 years ago one of them discarded a broken weapon during a battle and it landed in the headwaters of the Qelong river. Since then it has been leaking a supernatural toxin into the water and into the air, making the calley barely inhabitable. The player characters are intended to mercenaries from a far away land who might be on a mission to remove the weapon from the poisonous swamp or salvage pieces of it for a sorcerer unbothered by its dangers. 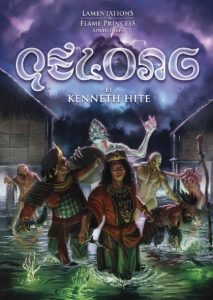 The book consists basically of three parts: Mechanics, creatures and factions, and locations. The content covers 45 pages plus two simple maps. While it’s certainly compact, I am not a big fan of the organization. There are several important faction in the setting, but half of their description is in the monster section and the other half in the descrption of their base in the locations section. This made it somewhat difficult to get a first bearing and when I tried to read the book simply from front to back, most of the things mentioned in the mechanics section didn’t mean anything to me yet. It’s only once you made it through the whole thing (admitedly not long) that you get the whole picture and what the book provides and what it doesn’t. A general outline that tells me what this sandbox is about right at the front of the book would have been really appreciated.

I am also somewhat under the impression that this was not actually playtested. And that the author is not a veteran GM of this game system. As other reviewers have pointed out before me, the rules for the supernatural poison are much too long and complicated for the minimal payoff they have. There are three full pages on how the toxin works, but in actual play it will come down to the players starting to make occasional saving throws after a few weeks and eventually they will fail one and get a -1 penalty to most of their rolls plus some wild magic effects for spellcasters. Counting the number of days spend breathing the toxic air and how much poisoned food and water has been consumed, and how often each character was injured is just overkill. The other thing that stands out is the abundance of special attack that are basically instant kill. I think the naga should have no problem completely wiping out a full party in a single turn.

But the main issue I have with Qelong is the amount of content. For a hexcrawl (which I assume is meant to be the default use) there is just too little material there. The area is 24×18 hexes, yet there are only ten locations in total. Seven of which are already clearly marked on the player map handout. So not really anything to discover beyond the next hill unless the GM creates it. On the other hand, for a fishtank the factions are all much too one dimensional. It’s not really more than you would find in an old D&D module from the 80s. And what makes the whole thing somewhat annoying is that the content that is actually there could have been fully explained in a lot less space. You get a full page of text that doesn’t really give you any more information than “One 8th level dwarf with ten gnome slaves and a mechanical elephant mining for gems”. You still have to make a map yourself and have to come up with your own ideas for how interactions with the NPC could play out. So I have to wonder, who is this book for? The crunch is too little to be usable out of the box like a D&D module, and the fluff is too light to get stories going. Either way, you’re going to have a lot of work ahead of you to run a Qelong campaign. You can use it as a starting point for your own creative work, but the material that is already present doesn’t really seem that imaginative to me.

Pretty much all the reviews that I had read have greatly praised it as a wonderful Asian fantasy sandbox with great spooky and weird elements, but I am personally not seeing any of that. The Asian elements really only go as far as a few names and terms, with no real references to Southeast Asian cultures. Which I don’t have a problem with. Taking inspirations from other cultures is great, and there is no harm done unless you have an outsider who understands very little of a culture attempting to educate others about its traditions and social meanings. Which Hite really doesn’t do at any point in this book. Nothing objectionable about that. And it’s great when you see a western author create fantasy that isn’t set in faux medieval England. But there also isn’t any ground to praise Qelong for it’s presentation of an Asian fantay setting. It’s a generic fantasy setting with monsoon, lotus, and stupas. I am also not finding anything spooky or weird about it. When it comes to spooky content, Dungeon magazine adventures regularly went a lot further. Now the garuda-lich is a cool idea, I admit that. But the myrmidons, the naga-kin, and the lotus monks are all very much standard fare.

Now is Qelong a bad book? No, I would not say that. It’s reasonably well done and at $7 it’s also reasonably priced. But I am not a fan of it in any way, and neither do I think this is something others should check out. So when it comes to chosing yay or nay, it does come down to nay.