Dark elves are at home in the Mahiri Jungles between the Red River and the Mayaka Kingdom on the southern shores of the Inner Sea. They resemble wood elves of the northern lands in stature, but their skin is a dark ashen gray and their hair ranges in colors from white to light blond and various shaded of silvery gray. The color of their eyes is usually in shades from dark ember or copper to a deep dark red and they have excellent vision in the night, even under the dark shadows of the thick jungles. Being well adapted to the dark, dark elves often make their homes in caves or live in homes with small windows, and life in the villages and towns usually starts only in the afternoon when the trees of the surrounding jungles provide plenty of shade and continues deep into the night. Like wood elves, dark elves are fully grown at around 24 years of age and often live well over 300 years if they don’t fall victim to disease, war, or accident.

The Ruyaki are the smallest of the three tribes of dark elves that lives in the Ancient Lands. They inhabit the northernmost parts of the Mahiri Jungles and the lands along the Red River south of the Vestanen Mountains. They often wear shawls and hoods to protect themselves from the sand that gets blown up from the dry banks of the Red River and to provide some shade for their eyes in more sparsely forested northern reaches of the Mahiri Jungles. They are also known for their armor, which is often made from the hides of giant insects that live in the region. Ruyaki clans are often rather small, often numbering just several hundred people or a few thousand. Vandren from the Vestanen Mountains rarely travel into Ruyaki territory, but the relations between clans most commonly depend on the past history between specific clans. There are few Ruyaki towns of remarkable size and some clans are almost entirely nomadic and live from hunting and keeping antelope-like mountain goats.

The Takari clans live along the coast of the western Mahiri Jungles between the Kuremo swamps at the mouth of the Red River and the territory controlled by the Mayaka. Like the Neshanen on the northern shores of the Inner Sea, their culture is centered around several major port cities and towns that have come to considerable wealth through trade with other cities. Highborn Takari often live in great city mansions or villas in the surrounding villages. In addition to the valuable goods from the jungles, the Takari also trade in slaves, which are usually captured from the Yagashi clans deeper in the jungles or Amakari and Gandju villages in Sunvanea. 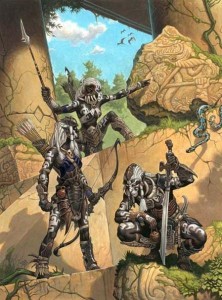 The Yagashi are the largest tribe of dark elves and are spread throughout a vast region of jungle south of the Takari coast and west of the Mayaka Kingdom. Most live in small villages that have little contact with the people from other land, but there is also a number of great temple cities deep within the jungles, which are ruled by powerful shaman queens. The Yagashi use little worked metal and most bronze is used for spear blades and arrow tips. Their warriors wear simple armor made from corded tree fibers and reinforced with animal bones that serves them well in the hot and humid jungles of their homeland. Their warriors are also painted in complex swirling runes made from a mixture of white clay and the ground bones of monsters, which binds the spirits of those creatures to them and gives them some of their powers. As much as they revere and honor the creatures of the jungles, they rarely wear more than two or three such runes on their body at the same time, as they fear the spirits might be able to possess them fully if they use too many at once and for a long time. Sleeping without washing off the runes is regarded as highly dangerous and warriors will often destroy the runes on an ally who falls unconscious in battle even before treating his wounds.