I’ve been looking at the Numenera RPG this week and while I wouldn’t say I am a fan of it and don’t plan to run a campaign with it, I do quite like the basic rules framework behind it. It’s not quite rules light, but manages to strike a pretty good balance between quick and easy rules while still being relatively open in what kind of characters you can make and what they can do. The problem with classless RPGs like Shadowrun or GURPS is that character creation is a lot of work as you build your custom characters from scratch and assemble them from very small parts. On the other end you get games with character classes like Advanced Dungeons & Dragons, where your choice of class determines a huge part of your characters to the point of dictating much of the characters personalty and backstory. And of course, there’s the d20 games which combine the worst of both worlds. There are also games like Fate and Burning Wheel, which define characters more by their role in the story than their own traits and abilities. The Cypher System used by Numenera and The Strange is pretty close to what I consider an ideal approach. There are three classes (warrior, rogue, mage), three ability scores, six levels, and monster stats really come down to only their hit points and the difficulty for all dice rolls the player characters are making against them. Bit more complex than Barbarians of Lemuria, but I think not really very much. I really quite like the idea of the system, though not so much their execution in Numenera.

Actually quite a while ago, it was announced that there would be Cypher System Rulebook, which will be released this summer. I’ve seen stores that already have it for preorder with a release date of late July, but that might just be their personal estimate and nothing official. (Like amazon listing release dates for Baldur’s Gate 3 for years. Good times…) And I have to say I am quite interested in this. 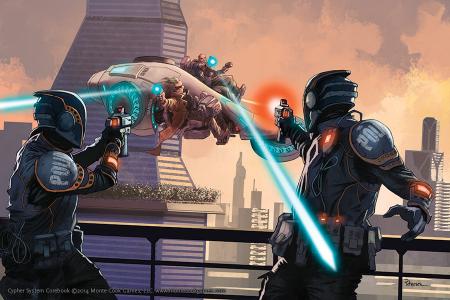 My interest with Numenera started because it’s an RPG that is about explorers setting out into a vast wilderness to explore the ruins of past ages to scavange for pieces of techno-magic they could bring back to their villages and city states, where they could be of great use and further the understanding of these artifacts. Which happens to be exactly the same thing I am doing with my Ancient Lands setting. While Numenera looks good, there is just a lot of focus on electronics and robots, which is admitedly a bit distracting when you want to use a Bronze Age fantasy setting. But it’s still a game about exploring places and finding stuff with special properties, so having a book with just the cypher system to use as a base for your own settings really does sound quite appealing. Might even work well for a Star Wars or Mass Effect campaign.

While Numenera got quite a bit of attention at its release, I hadn’t really heard much about since. But while looking for the original announcement for the new book, I was really quite surprised to see how much stuff there is for both Numenera and The Strange. No clue how well it sells, but it looks like this might be a system we’ll be having around for quite some time to come.