This is something that I always thought to be somewhat odd, and I think many of the people I played with did too. Why are clerics in D&D the third best frontline fighters? (Excluding self-buffing shananigans from 3rd edition which simply make them the very best.) Heavy armor is not something one would usually expect from a priest. Shouldn’t he be dressed in robes like a wizard? In 3rd edition, only three of the standard classes get proficiency with heavy armor, the other two being fighters and paldins. Why do clerics get it? 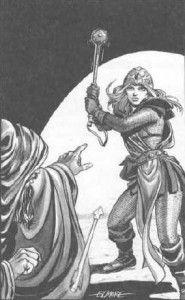 I’ve been reading and dabbling in the old Basic Rules these past days, and considering the whole design paradigm of the game, I think it makes perfect sense. Clerics can fight in heavy armor not because it’s their speciality, but because there is no reason for them not to wear it. The way armor proficiency works in 3rd edition is the opposite of how it originally was. The older editions worked by a logic that all characters can do everything unless there is a reason why they could not. Wizards don’t wear any armor because it interferes with their spells, and thieves don’t wear heavy armor because it limits the mobility they need for sneaking and climbing. Cleric spells are not restriced by armor and they usually don’t try to be extra stealthy or do any fancy acrobatics. So why shouldn’t they be wearing the best protection they can get?

When later wearing armor became something that needs a speical ability to use, clerics got that ability simply because they always had been wearing heavy armor. Even though under the new logic of the game it didn’t really make any sense anymore.