Part 2 of my review:

I want to say it here again, that I really love Sword & Sorcery and hope that I will be reading something great every time I begin a new story. And when it doesn’t start well, I keep on reading hoping it gets better and I am really looking for things to like about it and that I could recommend favorably. I was really hoping this second part of the review would be much more positive and make the book at least a decent anthology overall. But my reaction turned out to be something else: 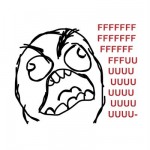 It’s just going to get a lot worse.

You will very often hear that Sword & Sorcery has a bad reputation for being infantile and badly written with a strong leaning towards trash. And reading anthologies like this, I really can no longer make any arguments to refute this claim. If this book is indeed representative of Sword & Sorcery, then the genre is indeed dominated by shit! And I don’t mean unrefined writing and cliched plots with too much dumb violence that is only good for an immature chuckle. To call it trash would be misleading, as there are always people with a certain affectionate enjoyment for trashy art. But this? This is indeed just shit!

There were some exceptions, of course. The Tower of the Elephant, Black God’s Kiss, Gimmile’s Songs, Undertow, Soldier of an Empire, and The Sea Trolls Daughter are all very nice stories, but the majority of this book is just terrible and completely out of place here.

And that is a shame. Sword & Sorcery can be such a wonderful genre of daring adventure, larger than life heroes, magical places, and mystical creatures. Which you barely get to see in this book. Or this one, or this one. I am done with this crap. I am really very much tempted to simply stick with a few famous authors and read everything that they have written, by ignoring all the junk on the fringes. Because what new writers have I discovered reading these shitty anthologies? C. L. Moore, C. J. Cherryh, and Caitlin R. Kiernan. (Which happen to have a funny naming pattern. ^^) Sorry Ladies, but as much as I enjoyed your stories and looking for more, that’s not enough to have made this ordeal worth it.

To anyone interested in Sword & Sorcery fantasy, I very much recommend against picking up anthologies, at least any that have been released after the 80s. Instead take a look around for the most famous writers of the genre and pick up books from those who specifically strike you as interesting. I can very much recommend Robert Howard and Andrzej Sapowski, who I consider the best in the field, and what I’ve read from Glen Gook and Charles Saunders were also not quite bad. And if you feel you really have to, Fritz Leiber and Michael Moorcock at least knew how the genre works and how to make it work for them, even if I don’t consider them good writers. But at least they are fun! Fun! That’s what Sword & Sorcery is all about.

Hither came Conan the Cimmerian, black-haired, sullen-eyed, sword in hand, a thief, a reaver, a slayer, with gigantic melancholies and gigantic mirth, to tread the jeweled thrones of the Earth under his sandalled feet.