I’ve been reading a lot of Sword & Sorcery books recently, both classic and (relatively) new, and I now got around to finish The Last Wish by Andrzej Sapkowski.

Spoiler for the end of this review: Oh boy, am I happy! 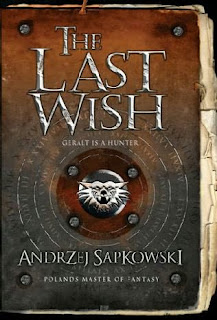 The Last Wish was released in Polish in 1993 and contains stories written both before and after the release of Miecz Przeznaczenia (no English translation) the previous year. The stories also take place earlier, which makes The Last Wish both the second and also first book in the series, depending on how you want to count it. The book consists of seven stories of Geralt of Rivia, a professional monster hunter from an old but fading orders of warriors who have acquired special powers through magic and alchemy. Six of the stories are conventional narratives with a beginning, middle, and end in the correct order, while with the seventh Sapkowski did something rather unconventional and quite clever. The Voice of Reason is about as long as all the other stories in the books, but split into seven different parts, between which the other six stories are inserted as flashbacks. It’s not like Geralt sitting down and telling another character a tale from his past, but instead we cut to those other stories so that Sapkowski can give us the necessary background info we need to understand the context of the next scene in The Voice of Reason. May sound strange, but in practice it flows very smoothly and works perfectly well.

Even though the book is kind of an anthology, I am not going to go into detail about each story individually, as they are all by the same author about the same character and they do form a single coherent, if very loosely connected work. In my previous Sword & Sorcery reviews there were always two things that really had me disappointed in a story: Lack of evocative descriptions and lack of thrilling action. While the former is mostly a personal preference, action, passion, and thrill is what I consider the most fundamental essence of Sword & Sorcery. You can change and experiment with all the common archetypes and conventions, but if there is no passion and fury, a story will always just be Heroic Fantasy. The Witcher has all the hallmarks of a Sword & Sorcery hero: An outsider who uses descisive action for selfish gains. And at least in the first two books, the tales of Geralt use the classic short story format as well. (The other six books don’t.) So I gave The Last Wish a try, hoping to find something for my Sword & Sorcery craving. And does it deliver?

Many descriptions of him make Geralt sound like a gloomy anti-hero, but in practice he is at least as good and compassionate as Conan. I would argue even considerably more so. In Geralts case it’s not that he doesn’t like other people, but simply that most people don’t like him for what he is. In the world of the Northern Kingdoms, which seems to be inspired by 17th century central-eastern Europe, the few witchers that are still around are clearly categorized as nonhumans, bunched together with elves, dwarves, and more monstrous creatures. And given the extensive modifications they underwent when they were recruited as children, that assesment is not completely unfounded. In addition to being much tougher and with a much higher resistance to poison and disease, the ability to see in the dark, limited spellcasting powers, infertility, and other unnatural traits clearly sets them apart from other people. And being basically a mercenary who show up wherever people are terrorized by monsters doesn’t exactly endear him to most normal folk. He never works for free, but that often seems to be more because he can’t allow getting a reputation to help everyone out of charity than being greedy or uncaring, and he is willing to negotiate for prices that his employers can afford. He is also very strict about only fighting monsters for pay and not doing any work as a mercenary or killer for hire. And while he likes being grumpy and sarcastic, he can actually be very diplomatic and reserves his contept for people who are calling for it. Even though Geralt is a lone wanderer who deals with peoples monster problems, he is quite different from characters like Conan, Fafhrd, or the Gray Mouser, in that he doesn’t revel in brawling and carnage. (Though he does admit to himself that his job not only pays reasonably well, but he also really likes doing it.)

Geralt is a person who is both very strong and good with swords and can shrug off considerable punishment, but he is also someone who doesn’t get into fights lightly. One problem with many Sword & Sorcery heroes is that they are almost invicible to the point where normal people don’t pose any possible thread to them and only main villains and boss monsters have any hope to injure them. Not only do I consider that weak storytelling, but it also trivializes death and glorifies violence. Now I love me some really cool action and furious battles, but I want both writers and characters to take fights with sharp weapons to the death serious and aknowledge that people are dying and mutilated. All to often, action fiction takes lethal violence as a joke. The Witcher is different. To Geralt, killing his enemy is a means of last resort, when everything else has failed. To him, violence does not solve a problem, it just ends a conflict by taking one side out of the picture while the real source of the problem doesn’t get adressed at all. The story The Lesser Evil is the most explicit about it, of the eight monster Geralt is dealing in the book, he kills only two. He also kills eight humans, of which six gang up on him at the same time and it can be counted as self defense. That’s really not a lot. Many fantasy heroes rack up higher body counts in a single scene.

Though that doesn’t mean that there are few fight scenes and lots of people end up getting hurt quite badly. In fact, The Voice of Reason takes place in a monastery where Geralt is staying while the wounds from his last adventure are healing. The book also has one of the most brutal and violent fight scenes I’ve read in a book. The fight itself is very short and ends with a headbutt to the face. But where most books would simply have the enemy knocked out cold and immediately forgotten, the rest of the scene brings up at several times that the woman got really badly hurt and while the leader continues interrogating Geralt, the rest of the group are busy tending to her smashed face while she is held to the ground in huge pain. At the meantime, some of the other characters are getting increasingly terrified by the situation escalting more and more. That’s the type of things I meant earlier, when I was talking about treating violence serious and not trivialzing it.

In fact, I think Sapkowski was quite ahead of his time, though probably it was also a major factor that the book was released in Poland in the early 90s, less than four years after the Poles had set into motion the mostly nonviolent collapse of the Soviet Union and its vassal states. He certainly had a quite different background and approach to writing than someone who had been watching endless Hollywood movies all his life. The major themes of the book are minorities, violence and nonviolence, accountability, terrorism, and state violence. You’d have no problem telling someone the book was written in 2013. But even 20 years earlier there were already people who felt like they had something relevant to say about them.

Another, minor thing I just love about the book, which makes it so much stand apart from American fiction, is the generous swearing. This is one of the most annoying things about American entertainment, this silly panicing about some casual swearing. Fuck that shit! ^^ The Witcher is about a badass dealing with lots of terrible people of both high and low station, and those people don’t threaten each other with death and torture in a child friendly language. And it’s really quite surprising how much character it adds to the people.

One more thing I feel like mentioning is how well picked the names for each of the stories are. They do sound rather poetic, but most of the time they are actually quite significant to the plot and often get mentioned word by word. However, it’s only during the later parts of the stories that the meaning really starts to make sense. Most books and stories have titles that are pretty much meaningless, describing either just a thing that appears in the story at some point, or being some banal and generic phrase. With this book it’s different. I recommend reading the stories while always keeping the title in the back of the head and occasionally pausing to think what meaning a scene might have in regard of the title.

I think it comes not as much of a surprise that I really love this book. This is pretty much exactly the kind of fiction I’ve been looking for in my search for modern Sword & Sorcery. I am dabbling myself in some early attempts to get words on paper, and the stories that inspire me the most are from Ghost in the Shell, Mass Effect, and Metal Gear Solid, which ironically are all science fiction and not fantasy at all. But they are all dealing with themes that I think would also work really well in a world of magic and monsters (and the technology in all three work a lot in the same way) and which I think could add some new relevance to Sword & Sorcery other than masculinity, courage, and honor. (I don’t consider Robert Howard a dumb macho writer in any way, but he wrote Conan four generations ago in a world and society that was dealing with things very different from the issues of today.) Geralt is a character who adresses exactly the same things that matter to me and does so successfully in a fantasy world. I also think that Sapkowski is really quite a step up from the common fantasy author. Not only has he something to say and important things to say, his style of storytelling is also quite sophisticated. As a reader, I really don’t have a high standard when it comes to the writing style of authors. If the plot is solid and the sentences allow me to keep up with what is going on and I don’t have to cringe at weirdly constructed sentences, I am perfectly happy. But in The Last Wish, Sapkowski is doing a lot more than simply telling us what happens. I mentioned the structure of the book with the six stories being put as flashbacks between the parts of The Voice of Reason and how the title of each story sets the overarching theme for the story and considering its meaning is part of the reading experience. I also remember when reading The Witcher, that I was very impressed how much personalty the characters had simply from the way they are speaking. At some points I did take notice that certain scenes were slightly drifting into socratic dialog, where two people arguing really is a vehicle to present a philosophical argument. But even though I noticed it, it did’t become annoying, because the characters were discussing genuinly interesting points. This book isn’t your average B-List fantasy novel to rush through and then pick up something else. I really recommend reading it to anyone, especially since it’s just a single book and not a particularly long one, so it’s not a huge investment if the subject and genre doesn’t normally interest you.