This time I am starting with Fiend Folio for AD&D 1st Edition by TSR, 1981; 89 pages of monsters. 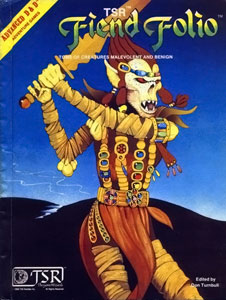 Probably the most famous and most highly regarded monster book there is. Even I, who never had huge praise for AD&D and consider lots of old D&D monsters to be just rediculous and dumb to a degree that it isn’t even funny, have to admit that this book is really quite amazing. I am a huge fan of monster books of any game and any edition, and I have to kind of admit that in the last 32 years, there hasn’t really been any book that has surpassed this classic in the amount of brilliant new creatures it contains.

The Apparition is a ghost in almost all respects, but unlike most undead, it doesn’t actually have to ability to cause any form of bodily harm to other creatures. However, its frightening appearance and telepathic abilities can make its victim think that they are strangled and about to suffocate. This will usually cause the affected creature to flee in panic, but those weak of heart might actually die from the sheer terror.

Astral Searchers are psychic shadows or imprints of strong humanoid emotions experienced on the Astral Plane. Usually the creation of an astral searcher is unnoticed by anyone nearby. After some time, they take a nebulous and somewhat humanoid shape and while they are not really sentient they start searching for a body to take over. They will wander the astral plane until they either come upon a visiting humanoid traveler, which is very unlikely, or find natural connection to another plane through which they can pass. Once there, it will attempt to possess the first available host creature and if it is victorious it will permanently replace its personalty and gain true sentience. It’s a kind of interesting idea that could make for good setups to a mystery adventure, but since the process is irreversible and the astral searcher has no recollection of how it came to be in this particular body, I am not sure what I would do with it.

The Berbalang is a winged humanoid similar to a gaunt gargoyle, and unless I am mistaken based on a creature from Indonesian myth, so it is kind of a classic creature of fantasy. Berbalangs spend most of their existence in hybernation, sending their spirit to other worlds through an astral projection. During the full moon, however, its spirit will roam the countryside near its hidden lair to feed on human flesh. The spirit is identical to the actual creature in virtually every way. But if the spirit body is destroyed, the real creature could die as well, so it will flee when injured and attempt to return to its body. This is the opportunity to follow it back to its lair and kill its real body.

On the first glance, the Blindheim looks like one of those classic stupid monsters of old D&D. It’s a large, semi-humanoid frog that can project itense beams of light from its eyes. While the appearance is rediculous, the creatures stats are actually quite interesting. It’s a subterranean creature that lives in an environment where creatures need very effective eyesight to see anything at all and surface creature will have their eyes adjusted to darkness. By being able to generate very bright light, all creatures but those who are sightless will be blinded and unable to fight effectively. It’s a creature with a natural flashbang ability, which I think is pretty cool and an interesting example of fantasy evolution.

Blood Hawks are a good example of a very basic creature that still can make for very unusual and interesting encounters. They are basically large hawks or small eagles with no special abilities, but unlike regular birds of prey they hunt in swarms. And have a taste for human flesh. A single one can cause quite nasty injuries to humans, but a dozen of them don’t have much trouble to actually kill them. Since they look rather unassuming, I think they could make great enemies for a whole short adventure, in which the PCs have to watch the skies all the time and might even end up besieged in abandoned cottages by a whole swarm of them. I am starting a new campaign in two weeks, and I think I’ll be using them on my players. Might be fun to have them show up once every three or four sessions, sometimes attacking, sometimes not.

Bloodworms are not really that interesting. They are large brown and green worms that hide at the bottom of underground lakes and rivers and stay hidden until they can sneak up on prey. But instead of attacking normally, a hit by a blood worm means that it bites its jaws firmly into its victim and then deals damage automatically each round until they are removed. Trying to get those things off an ally while he is basically eaten alive from the inside, all while fighting waist deep in water could make for very intense and memorable encounters, even if mechanically there isn’t anything extraordinary going on.

The Booka are helpful house spirits that make their homes in the chimneys of houses and only come out when nobody is watching to perform some simple chores like sweeping the stairs. If they are ever observed, they will leave the house and never return. Not a very interesting creature, but they are one of the very few fantasy creatures that seems to be based directly on a German fairy tale, so I want to mention them here. More interesting, and completely unrelated to the source story, is the fact that they hate evil humanoids and tend to cause mischief around them rather than being helpful. This might make them actually useful to include in a game as a kind of invisible ally to the PCs.

While the concept is very simple, I couldn’t really go through this book without mentioning the Bullywugs. Like kobolds, they seem to have become hugely popular because of their underdog status and dorkiness. Bullywugs are small humanoid frogs who live in small tribes in the swamps and jungles. Since they are pathetically weak, they only pose a threat to adventurers in large groups. Which is how they are usually encountered.

Bunyips are based on stories from Australien natives about a large predator that haunts the rivers near the coasts and has a terrifying howl that can be heard for many miles. The creature in this book is a very large and ferocious seal with shaggy fur. It will flip over boats and use its roar to scatter any nearby creatures and then attack the smallest of them by biting of a limb and then disappearing again.

The Carbuncle is just all out weird, but complex enough to have a multitude of uses in adventure. It appears like a small armadillo with a strikingly colored carapace and a large ruby growing on its forhead. When the carbuncle is killed or the ruby forcefully removed, it will crumble to worthless dust, but the carbuncle can chose to give up the gem voluntarily and it will grow back over the following months. They also seem to have a kind of lack of a sense of self preservation and will simply die when captured, making it impossible to force them to give up the ruby. Carbuncles are quite intelligent and can communicate with humanoids, and it can offer its ruby as payment in return for favors. In addition carbuncles also have the ability to communicate through telepathy, read emotions, and predict the future. However, they are also kind of evil and delight in using their powers to cause strife and violent conflict, that can often lead to deaths.